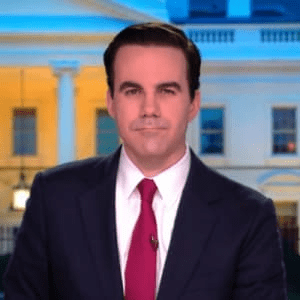 Robert Costa is a media personality serving as Chief Election and Campaign Correspondent for CBS News. He is also co-author of “Peril” with Bob Woodward. Previously, he was a National Political Reporter for The Washington Post.

Robert grew up in Lower Makefield Township, Bucks County, Pennsylvania, where he attended Pennsbury High School and graduated in 2004. While at Pennsbury, Sports Illustrated writer Michael Bamberger profiled him in the book Wonderland: A Year in the Life of an American High School.

He gained notice during high school for bringing rock musicians such as John Mayer, Eve 6, and Maroon 5 to perform at the school. He also reported for The Bucks County Courier Times, interviewing bands and reviewing concerts in the Philadelphia area, and covered professional and local sports for PHS-TV, the student television station.

In 2008 he earned a Bachelor’s degree in American studies from the University of Notre Dame and a Master’s degree in Politics from the University of Cambridge in 2009. During his time at Notre Dame, he held internships at PBS’ Charlie Rose, ABC’s This Week with George Stephanopoulos, and in the House of Commons of the United Kingdom. He also hosted and produced an interview program for ND-TV called Office Hours on campus.

At Cambridge, Robert was an active member of the Cambridge Union debating society. He also focused his research on Winston Churchill and the United Kingdom–United States relations. His adviser was Andrew Gamble, a British academic and author.

He is the son of attorneys Anne-Dillon and Thomas E. Costa. His father was an attorney for the pharmaceutical company Bristol-Myers Squibb.

He has three siblings.

There is no information about his marital status and kids.

Robert is the chief election and campaign correspondent for CBS News. He collaborates on special projects and investigations with The Washington Post, where he previously worked as a national political reporter. He is also co-author with Bob Woodward of “Peril,” a No. 1 bestselling book about the final days of the Trump presidency and early days of the Biden presidency.

Robert was a Bartley Fellow at The Wall Street Journal. In 2010, he was hired as a reporter by the conservative magazine National Review. In December 2012, he was promoted to the position of Washington editor for the National Review. While at National Review, he was a contributor for CNBC, appearing on The Kudlow Report, and for MSNBC.

In November 2013, he left National Review for The Washington Post, joining the paper officially in January 2014. On December 10, 2015, he was named a political analyst for both NBC and MSNBC. He is known for his deep sourcing within national political circles.

On January 1, 2021, he hosted his last episode of the Washington Week program on PBS. He left the television program to write a book with Bob Woodward. The book, entitled Peril, was released in September 2021. To promote the book, Woodward and Robert appeared on The Late Show. In October 2021, he was a solo guest on NPR’s Fresh Air with Terry Gross. The book has been cited in subpoenas issued by the United States House Select Committee on the January 6 Attack.

In 2022, he left the Washington Post to join CBS News as the network’s chief election and campaign correspondent.

Robert Costa Salary and Net Worth