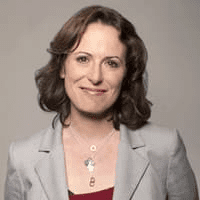 Maggie Haberman is a media personality serving as a White House correspondent for The New York Times. She is also a Political Analyst at CNN. Previously, she was Politico’s Senior Reporter.

Haberman graduated from Ethical Culture Fieldston School in 1991 followed by Sarah Lawrence College where she obtained a Bachelor’s degree in 1995.

A singer, in 3rd grade she played the title role in a performance of the musical Annie at the P.S 75 Emily Dickinson School.

“Journalism was not my first career choice in life,” said Haberman. “I had dreamed of being a fiction writer. My father is a journalist and I had a very clear sense from growing up of what journalism can be like for families.”

Maggie is the daughter of Clyde Haberman, a longtime journalist for The New York Times, and Nancy Spies Haberman, a media communications executive at Rubenstein Associates.

Her mom has also worked for a client list of influential New Yorkers including Donald Trump.

Her father Clyde was first married to her mother Nancy. The couple was blessed with two children Maggie, and Zach Haberman, lead breaking news editor for NBC News.

In 1984, her father married Kathleen Jones, former director of special projects at Human Rights First and former associate publisher of The New York Review of Books. They were also blessed with a daughter Emma Haberman, special events manager at World Central Kitchen in Washington, D.C, and Maggie’s half-sister.

Maggie has been married to Dareh Ardashes Gregorian, a reporter for the New York Daily News and formerly of the New York Post. The couple tied the knot on November 9, 2003, at the Tribeca Rooftop in Manhattan. Judge Edward R. Korman, the chief judge of the United States District Court in Brooklyn officiated.

They have three children and live in Brooklyn.

Haberman is a White House correspondent for The New York Times. She joined The New York Times in 2015 and was part of a team that won a Pulitzer Prize in 2018 for reporting on Donald Trump’s advisers and their connections to Russia. She previously covered the Trump administration and continues to cover Donald Trump and politics in Washington.

Haberman returned to the Post to cover the 2008 U.S. presidential campaign and other political races. In 2010, she was hired by Politico as a senior reporter. She also became a political analyst for CNN in 2014.

In addition, she was a finalist for the Mirror Awards, with Glenn Thrush, for the 2014 profile “What Is Hillary Clinton Afraid Of?”

Her reporting style as a member of the White House staff of the Times features in the Liz Garbus documentary series The Fourth Estate. Among the daily frustrations of her work covering the Trump administration, she is also shown on camera in her role as a mother being interrupted during tense moments to take phone calls from her children, at one point declaring to her phone, “You can’t die in your nightmares.”

According to an analysis by British digital strategist Rob Blackie, Haberman was one of the most commonly followed political writers among Biden administration staff on Twitter.

Recently a lot of searches have been on Maggie’s weight loss. However, she hasn’t addressed the issue.