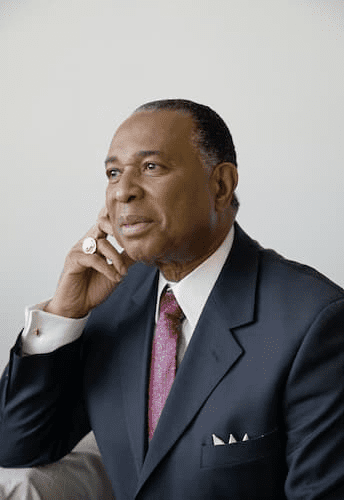 Reverend Jacques DeGraff is a television personality serving as a contributor on FOX News Channel (FNC) since 2010. He also serves on the pastoral staff at Canaan Baptist Church in Harlem and he has been an outspoken advocate for economic and social justice for people of color.

He has not disclosed when and where he was born, therefore his age is unknown.

He hasn’t revealed his exact height although he is a man of tall stature.

A graduate of Hunter College, he studied at the NYU School of Real Estate, New York Theological Seminary and Harvard Kennedy School of Government.

He is the son of a nurse. On January 26,2021 during an interview with Rabbi Julie Schonfeld when he was talking about how Black communities are overcoming distrust of the medical community. He said; ‘Being the child of a nurse, I know what it’s like when people do a double shift, or when somebody at home doesn’t have their mother at Christmas dinner.’ Although it is not known whether he has siblings or not.

He is married though his wife’s name is unknown. He lives in Chester, Virginia with his wife.

Reverend Jacques is a FOX News Channel (FNC) contributor since 2010. He also serves on the pastoral staff at Canaan Baptist Church in Harlem. For most of his life, he has been an outspoken advocate for economic and social justice for people of color. His path to activism was set when as a high school student attending a gifted program at Morehouse College, he had a chance to meet with the Reverend Dr. Martin Luther King.

Reverend DeGraff has been the chief of protocol in the National Action Network, traveling with Reverend Al Sharpton to the Sudan to spotlight abuses against Christians and to Cuba to meet with Premier Fidel Castro to discuss the U.S. embargo.

He was the featured speaker at the United Nations at its Commission on Violence against Women and coordinated a clergy prayer vigil at the United Nations to protest the bloodshed in Darfur, for which he was featured on the CBS Evening News. He was also invited by Pope Benedict to attend the Ecumenical Prayer Service during his recent Papal visit along with Christian and Orthodox leaders from across the country.

The City of New York honored Reverend DeGraff as its MWBE Advocate of the Year. He serves as the pioneering chair of the School Construction Diversity Council that sets the standard across New York State for minority- and women-owned business participation. He has also served as lead negotiator for the breakthrough Collective Bargaining Agreement (PLA) with New York City and the Building Construction Trades Council on behalf of the Minority Business Leadership Council that created unprecedented contractual and job opportunities for minorities and women.

Reverend DeGraff was also named to the Nielsen Media African American Advisory Board after he championed for accuracy in media ratings to include communities of color. Most recently, he received, from the State of Israel, the Martin Luther King, Jr. Award for Lifetime contributions in the struggle for social justice.

He has an estimated net worth ranging between $1 to $5 million.