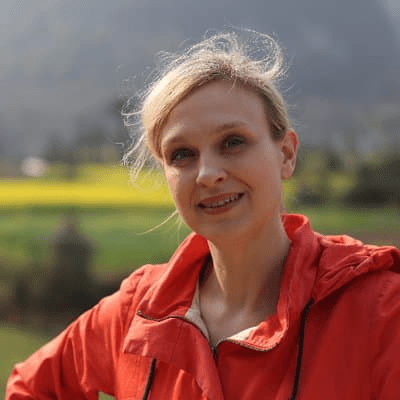 Rebecca Morelle is a media personality serving as the global science correspondent for BBC News since 2013. Previously, she was the science video journalist for BBC News.

She hasn’t revealed when she was born. Therefore her age is unknown.

Morelle is British by nationality.

She graduated from Oxford University in July 2001, with a first class degree in Chemistry.

Rebecca is married however her husband is unknown. She also has a child. On November 10, 2017 she posted a picture of her baby bump.

Morelle has been the global science correspondent for BBC News since 2013. On September 20, 2021 she was appointed as the BBC’s new Science Editor. She’ll be based in Cardiff with the Climate and Science team. Rebecca will start her new role later this year.

Morelle began her career as senior press officer at the Science Media Centre in 2001. In late 2005, she was the first recipient of the Ivan Noble Bursary at BBC News.

In 2006, she was appointed the science, technology and health reporter before becoming science video journalist in 2007.

Morelle is also the inaugural recipient of the Ingenuity Fellowship, the Faculty of Engineering’s Journalist in Residence Program.

“This is a fantastic opportunity, and to say I’m delighted is an understatement,” said Morelle.

“Reporting on a field that I love in a fast-paced newsroom is fascinating, exciting and fulfilling,” she added. “But working in news also means having to dip in and out of subjects as you leap from one story to the next. The prospect of spending time totally immersed in the world of research, speaking to scientists and engineers, seeing their work first-hand – all without the pressures of looming deadlines – is extremely appealing.”

On March 16, 2017, a group of tourists and BBC film crew suffered burns and head injuries following a “huge explosion” of lava on Mount Etna. Around eight people were injured.

Rebecca was present during the eruption. She reported the incidence with a series of tweets from the scene.

“Running down a mountain pelted by rocks, dodging burning boulders and boiling steam – not an experience I ever ever want to repeat,” she said.

Etna had reportedly spewed lava three times in three weeks. However the explosion was the first eruption in more than a year and it appeared to come out of the blue. It was also believed to be one of the largest volcano eruptions worldwide in recent years and was called Etna’s biggest for at least 30 years.

Running down a mountain pelted by rocks, dodging burning boulders and boiling steam – not an experience I ever ever want to repeat (8)

Rebecca Morelle Salary and Net Worth