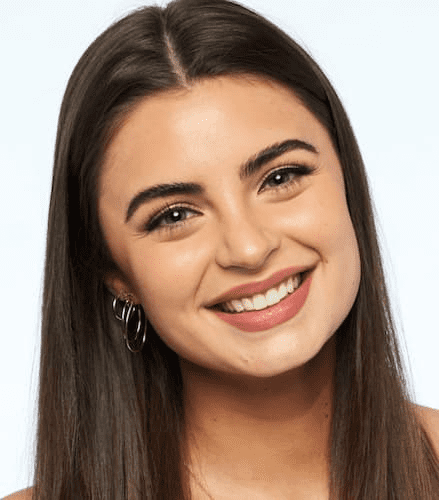 Rachael Kirkconnell is a television personality and a graphic designer. She was also the winner of Matt James’ season, “The Bachelor season 25.”

Racheal stands at a height of 5 feet and 5 inches tall. She also weighs 54kgs (119lbs) and has brown eyes and black hair.

A 2019 graduate of Georgia College, Racheal received a Bachelor’s degree in Marketing. She was also on the Dean’s List twice while at the college.

She grew up alongside her two siblings; a younger sister, Trinity and a younger brother, Greyson.

Kirkconnell was the winner of Matt James’ season of ‘The Bachelor’. On the other hand James was the first Black Bachelor in the series’ history. Despite the fact that Racheal won Matt James’ season, she did not receive the coveted first impression rose that went to Abigail Heringer.

The duo first met on night one of “The Bachelor” season 25. During “Pretty Woman” date, James took Kirkconnell on a shopping spree, and she got her very own pair of Louboutins. She also opened up about her feelings for him, “I really am already completely falling in love with you. And I want to walk out of here with you, and I want to start my life with you. And I hope that will happen. But the scary part about it is I just don’t know if that’s going to be the outcome.”

Matt also confirmed he was feeling the same way, “You’re not crazy, because I feel the same way. Rachael, I’m falling in love with you too. And it is scary to say, but when I’m with you, it just feels right.”

Racheal and Matt left the season together in November 2020 although Matt did not propose. A decision that Kirkconnell seemed fine with.

In March 2021, during “After the Final Rose,” James and Kirkconnell revealed they had broken up. This was after her racism scandals had come out.

The two lovebirds are together again after a series of secret meetings. In May 2021, Matt revealed that Racheal gave him an ultimatum before they could date again. And it was, ‘If you’re going to make this work, let’s do it. But, if you’re not going to make it work, I’m going to let you do your own thing.’

She was one of the contestants of the Matt James’ season of The Bachelor. The Bachelor is a dating reality TV show aired on ABC.

The Georgia native exposed a different side of her that really angered so many of her fans; being a racist. The scandals began when a TikTok user accused Racheal of mistreating her during high school for “liking Black guys.”

Later on another video on the platform alleged she “liked” a slew of racist Instagram posts, including one that featured the Confederate flag and another that showed a group of white women dressed as Mexican men.

Additionally, an old photo of her attending antebellum-themed fraternity party in 2018 started circulating.

Through an Instagram post on February 12,2021, Racheal came out to apologies for her actions captioned, ‘my statement and apology is for the people of color that I have offended, if you do not identify as BIPOC then it is not your apology to accept. please be respectful to those who have been affected.’

In the recent past, Kirkconnell has lost significant weight. This has been noticed by her fans who now question the cause of her weight loss. However, she hasn’t come out to address the issue.

She has an estimated net worth of $250K.