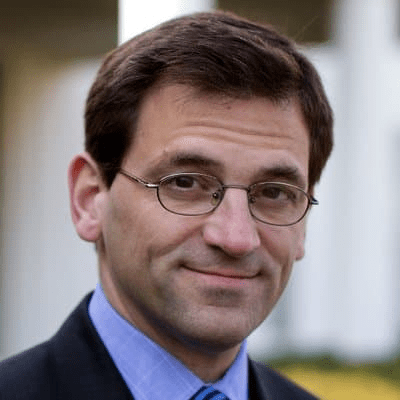 Peter Baker is a media personality serving as the Chief White House Correspondent for The New York Times. He is also a Political Analyst for MSNBC and a Regular Panelist on PBS’s “Washington Week.”

Baker attended Oberlin College. While there, he was a reporter and editor of the student newspaper, The Oberlin Review.

However, after two years he left the college. In June 2021 when asked why he left he said: “I was not a good student. I worked too much at the Review when I probably should have gone to some more classes. Oberlin and I agreed that I should take a little time off in order to get my head on straight. I thought it’d be a year, maybe two turned out to be 35, but here I am: I’m back!”

“The line I’m going to use in the speech tomorrow is “I may not have gotten a degree here, but I got an education here.” Oberlin is a transformative place for a lot of people for a lot of reasons and it was for me too,” he added.

He is the son of Linda Gross (later Sinrod) and E. P. Baker. His mother was a computer programmer and his father a lawyer.

Peter is married to Susan B. Glasser. The couple tied the knot in September 2000 in Washington at Meridian House, an early-20th-century house.

Susan is a staff writer at The New Yorker, where she writes a weekly column on life in Washington. She grew up in Montclair. Both of her parents worked in publishing and founded The Legal Times newspaper, which was published out of Washington, D.C. when she was a child.

Glasser has served as the top editor of several Washington publications; most recently, she founded the award-winning Politico Magazine and became the editor of Politico throughout the 2016 election cycle. During her tenure, she previously served as the editor-in-chief of Foreign Policy, which won three National Magazine Awards, among other honors.

Before that, she worked for a decade at the Washington Post, where she was the editor of Outlook and national news. She also oversaw coverage of the impeachment of Bill Clinton, served as a reporter covering the intersection of money and politics, spent four years as the Post’s Moscow co-bureau chief, and covered the wars in Iraq and Afghanistan. She edited Roll Call, a Capitol Hill newspaper, early in her career.

Her books include “Kremlin Rising” and “The Man Who Ran Washington,” both of which she co-wrote with her husband.

The two live in Washington with their son Theodore who is around 17 years old as of 2022.

Peter and his wife Susan have a son named Theodore. Recently, a lot of online searches have been directed toward his accident. However, there is no information regarding his accident.

James Barker is a Canadian country music artist and frontman of the James Barker Band. He is not related in any way to Peter Barker, the chief White House correspondent for The New York Times.

Baker is the chief White House correspondent for The New York Times, responsible for reporting on President Biden, the fifth president he has covered. He previously wrote about Presidents Donald J. Trump and Barack Obama for The Times and Presidents Bill Clinton and George W. Bush for The Washington Post.

Baker joined The Times in 2008 after 20 years at The Post and has reported on elections, inaugurations, economic crises, foreign policy, natural disasters, legislative battles, and Supreme Court nominations. He co-authored the Post’s original story breaking the Ken Starr investigation of the Monica Lewinsky scandal and served as the paper’s lead writer on the impeachment of Mr. Clinton. He also covered the ups and downs of the Bush and Obama presidencies, including the Iraq war, Hurricane Katrina, and the raid that killed Osama bin Laden. In addition, he chronicled the tumultuous Trump administration through the coronavirus pandemic, the storming of the Capitol, and both impeachments.

In between stints at the White House, Baker and his wife, Susan Glasser, spent four years as Moscow bureau chiefs for The Post, chronicling the rise of Vladimir Putin, the rollback of Russian democracy, the second Chechen war, and various terrorist attacks. He also covered the early months of the wars in Afghanistan and Iraq.

Baker was the first American newspaper journalist to report from rebel-held northern Afghanistan after Sept. 11, 2001, and he spent the next eight months covering the overthrow of the Taliban and the emergence of a new government. He later traveled the Middle East for six months, reporting from inside Saddam Hussein’s Iraq and around the region before embedding with the United States Marines as they drove toward Baghdad. At The Times, he served briefly as Jerusalem bureau chief. He is also a political analyst for MSNBC and a regular panelist on PBS’s “Washington Week.”

A native of the Washington area, Baker attended Oberlin College and worked for The Washington Times for two years before joining The Post in 1988 as a Virginia reporter.

Baker is the author of six books, most recently the bestselling “The Man Who Ran Washington: The Life and Times of James A. Baker II” (Doubleday, 2020), written with Ms. Glasser and named one of the books of the year by The New York Times, The Washington Post, Financial Times, Fortune and Bloomberg.

He also wrote, “Obama: The Call of History” (New York Times/Callaway, 2017), a finalist for an NAACP Image Award for Outstanding Literary Work; “Days of Fire: Bush and Cheney in the White House” (Doubleday, 2013), which was named one of the five Best Non-Fiction Books of 2013 by The New York Times; “The Breach: Inside the Impeachment and Trial of William Jefferson Clinton” (Scribner, 2000), a New York Times bestseller; “Impeachment: An American History” (Modern Library, 2018) with Jon Meacham, Timothy Naftali, and Jeffrey A. Engel; and, with Ms. Glasser, “Kremlin Rising: Vladimir Putin’s Russia and the End of Revolution” (Scribner, 2005), named one of the Best Books of 2005 by The Washington Post.