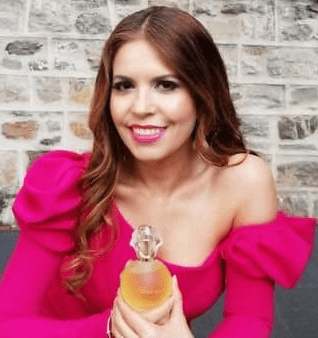 Perla López Baray is a Mexican Multi-Emmy nominated journalist. She is also an Anchor, executive producer, and Supervisor of the Spanish news department at WFMZ-TV, Channel 69. In addition, she is the owner of Perla Fragrances.

López was born and raised in the state of Chihuahua, Mexico. However, her age is unknown.

She is a Mexican.

López graduated with honors in 2001 and obtained a double major in Journalism and Mass Communications and Foreign Languages and a supplementary major in Latin American Studies at New Mexico State University in Las Cruces.

The daughter of Raquel, Perla was born and raised in the state of Chihuahua, Mexico. In 1996, she immigrated to New Mexico leaving behind her family and friends in her homeland.

López is married to Ian Holmes, a vocal coach, and singer. On June 22, 2022, the couple celebrated their third anniversary.

She has managed to keep her personal life away from the limelight. Therefore, it is not clear whether she has kids or not.

Perla is a Multi-Emmy nominated journalist. Her passion for journalism began at a young age in Mexico, her native country, where she entertained herself by interviewing her family with her grandfather’s camcorder. She began her journalism career in 2001 in Albuquerque, New Mexico a week after graduating from college.

In Albuquerque, she obtained a job at KLUZ-TV, the Univision Network affiliate, where she worked as a reporter and fill-in news anchor. She also received several awards, including an AP Award at KLUZ-TV.

Perla has also received multiple Emmy nominations as an anchor, producer, and reporter, and other awards such as the Delaware Valley’s Most Influential Latinos and The Golden Latin Award: Highest Achievement for an Individual in any Field.

In 2003, Perla could not pass up the opportunity to be one of the pioneers of what, at the time, was the only Spanish newscast in southeastern Pennsylvania, southern New Jersey, and Delaware. She wanted to be part of the growing Hispanic population in this area and serve as a voice to communicate the values and richness of the Hispanic culture in the region. That was the reason Perla accepted a job at WFMZ-TV, Channel 69 as a reporter and fill-in anchor.

As a journalist, Perla has had the opportunity to visit Mexico on several occasions, Puerto Rico, the Dominican Republic, Colombia, and different cities in the United States on different assignments. With her luggage on hand, she is always ready to travel to inform the community. Perla says that her unforgettable journey has given her a wonderful opportunity to share something that for her is priceless: her heart, energy, faith, and love for her community.

Her overall purpose is to educate, inform, inspire and empower people from all walks of life to believe in themselves and reach their full potential and showcase those who are doing something great to make this world a better place to live.

López’s Signature Fragrance was born when she was looking into buying perfume for her mother, Raquel, who has very sensitive skin and gets headaches with strong scents. Her desire to surprise, inspire and empower her mom and women from all walks of life led her to develop her Signature Fragrance in 2009.

The long-lasting signature fragrance is manufactured in the USA with the highest concentration of high-quality oils developed by CPL Aromas, a major international fragrance house based in London.

In 2015, López expanded her brand by adding specialty hand-poured natural soy candles and handcrafted premium soaps to her Signature Collection. She also developed the Natural Collection, which includes specialty soaps and bath products. Made in the USA with high-quality natural ingredients, the products are an alternative to conventional items. The products are also inspired by love and beauty and are free of preservatives, sulfates, parabens, and detergents. The company operates from a faith-based standpoint embracing integrity, diversity, love, unity, and empowerment.