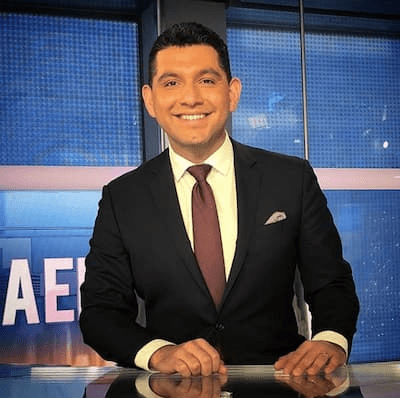 Nick Valencia is an award-winning journalist serving as CNN correspondent based in the network’s global headquarters in Atlanta. He started at CNN in 2006 as a teleprompter operator and he regularly appears across CNN, CNN International, HLN and CNN en Español. Previously he was a national desk editor at CNN.

He was born in Los Angles, United States though his exact age is unknown.

Valencia is an American national.

While in high school, Nick was the sports editor of his high school newspaper in Northeast Los Angeles. He later went on to work for FOX Sports Net. In 2005, he graduated with degrees in Journalism, Politics and Spanish from the University of Southern California. At USC, he was a documentary filmmaker for the National Champion USC football team.

Nick is the son of Ricardo Antonio and unknown mother. His father passed on.  Valencia and his mother seems to be very close since he often post her on his social media pages. He also has a grandma, grandma Amada. However, it is not clear whether he has siblings or not.

Valencia is a CNN correspondent based in the network’s global headquarters in Atlanta. He regularly appears across CNN, CNN International, HLN and CNN en Español. He has broken numerous stories including his story on the treatment of a Honduran migrant who was mistreated while in custody sparking an internal government investigation. Valencia was also one of the reporters to break the story of a racist and vulgar social media group with a nexus to current and former CBP agents. In 2018, Valencia was CNN’s lead reporter covering President Trump’s zero tolerance family separation policy that was later lifted.

Nick has dedicated much of his attention in recent years to covering issues that impact the Latino community in the U.S., including the story of an American teen who was wrongfully held in ICE custody on suspicion of being in the country illegally. In late 2019, he was the only network TV reporter to travel into a migrant tent camp in Matamoros, Mexico, where illness and disease among asylum seeking migrants was rampant.

During his reporting career, he has traveled internationally as well, including a trip to the Colombia-Venezuela border to spotlight deteriorating conditions after a failed coup-attempt, as well as the Mexican drug wars as the first American inside the tunnel used by drug kingpin El Chapo to escape a Mexican prison. He has also secured several news making interviews. In 2018, he was the first TV correspondent to interview Stormy Daniels, the porn actress purported to have had an affair with President Trump, and was the first to interview Alice Johnson seen as the face of prison reform in America after her clemency was granted.

During CNN’s 2017 hurricane coverage, Nick was in all three major hurricanes, including Hurricane Maria, Harvey and Irma. While on-air he helped reunite a son with his father who he feared had died in the storm. As a general assignment reporter Valencia has covered everything from presidential elections and congressional races, to Ebola outbreaks and prisoners-of-war. He has reported from state legislatures across the country on controversial religious freedom bills, as well as the so-called Transgender Bathroom Bill in North Carolina. He’s also been on the ground during multiple natural disasters, and covered terrorist attacks, including the shootings at Pulse night club and Mother Emmanuel Church in Charleston, South Carolina.

He started at CNN in 2006 as a teleprompter operator, traveling to Uganda as a one-man-band. Currently he serves as the National Vice President of Broadcast for NAHJ.

In 2013, the National Association of Hispanic Journalists (NAHJ) awarded him its inaugural “Sí Se Puede” Excellence in Leadership award. The Huffington Post also acknowledged him as one of the most influential Latino journalists in America and he was named one of the “Top 50 Latinos” to follow on Twitter.

Valencia has an estimated net worth of $2 million.