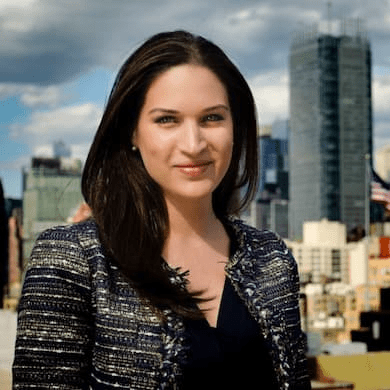 Nada Tawfik is an award winning and Emmy nominated media personality serving as the New York and United Nations Reporter for the BBC. Previously, she was the BBC’s business presenter and reporter, co-anchoring with London a half hour program called Business Live on BBC World News.

She is tall in stature however her exact height is undisclosed.

Tawfik is an Egyptian-American. Her parents originates from Egypt making her Egyptian by origin.

Nada attended Randolph High School and graduated in 2002. She also graduated from New York University where she double majored in Journalism and Middle Eastern studies in 2007. As part of her coursework, she studied abroad in Beirut and London.

She is the daughter of Egyptian origin parents, Mohamed Tawfik and Hoda Tawfik. However she hasn’t mentioned whether she has siblings or not.

Tawfik is married to Kareem Osman, a Branch Manager of Robert Half Technology. They got engaged in May 2007 before finally getting married on December 29, 2007.

Together they have two children, a daughter and a son.

Tawfik is an award winning and Emmy nominated journalist, currently serving as the New York and United Nations Reporter for the BBC, the world’s largest international news broadcaster. She joined the network in 2008.

From United Nations headquarters in New York, she has covered diplomatic activity on some of the most pressing international crises. She provided analysis and reports during emergency Security Council meetings and resolutions responding to international threats to peace and security including on Syria, North Korea and Ukraine.

Tawfik has been on the scene for countless breaking news stories, including terror attacks in New York, the Parkland, Florida school shooting, Hurricane Harvey in Houston, and the manhunt for the Boston Marathon bombers. She has also tackled several cultural, health, entertainment, and human-interest features for the BBC’s numerous TV, radio and online outlets.

Prior to her current role, she was the BBC’s business presenter and reporter, co-anchoring with London a half hour program called Business Live on BBC World News. She regularly reported live from the floor of the New York Stock Exchange on financial markets and monetary policy. After the Federal Reserve raised interest rates for the first time in more than a decade, she provided live coverage on the market’s reaction.

Tawfik started her career as a news assistant at CNN working on CNN special, I-Report, Caught on Camera. She wrote, produced and researched segments for the special. She has also been recognized with awards for her work as a producer covering the BP oil spill and its effects on Louisiana and the drug wars in Mexico.

In June 2013, a transatlantic flight made an emergency landing in Scotland after Nada found a note which read ‘I’ll set this plane on fire.’

The EgyptAir passenger jet, carrying 326 people, was escorted by Typhoon fighter jets from RAF Leuchars and met by a convoy of half a dozen police vehicles at Glasgow Prestwick airport. It had been travelling from Cairo to JFK Airport in New York when it was diverted after a threatening note was found in a toilet.

Nada was on the flight and said she found the note in the Boeing 777’s toilets by the sink. She immediately told cabin crew who locked the toilet. She was flying back to New York after a month visiting her parents in Cairo.

Speaking from inside the plane, she told the Mail that she went to use one of the toilets about three hours into the flight. She then saw the message on the napkin, which read: ‘I’ll set this plane on fire. Seat 46D.’

Nada said, “I freaked out straight away and thought about my daughter. I went to the back of the plane and showed the note to members of staff.”

‘They locked the bathroom and said they would take care of it. But nothing happened for a while and I was freaking out, thinking we were in danger. I even walked by 46D but there was just an old woman sitting there. I didn’t think it was a joke. Who jokes like that on a plane these days?”

Nada Tawfik Salary and Net Worth