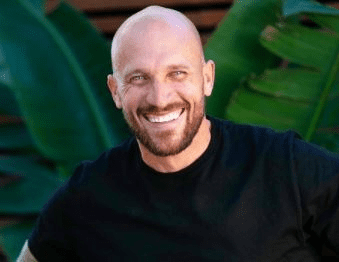 Mike Pyle is a landscape designer, consultant, and Co-host of HGTV’s “Inside Out” alongside Carmine Sabatella. He together with Carmine Sabatella are also judges of Rock the Block series season two.

He celebrates his birthday on December 5 though his year of birth is unknown.

Pyle stands at a height of 5 feet 11 inches tall.

Pyle is the son of Stephen Pyle and Delia Elizabeth Pyle. On June 21, 2020, he took to his social media page to wish his dad a happy fathers day. In the post, he referred to his dad as a ‘rad dad.’

He has a brother, London Pyle. London was born on November 13, 1983. He also graduated from Desert High School and Point Loma Nazarene University.

Pyle is not married yet he is engaged to Lizzy Farag. Lizzy is a registered nurse. She has worked at Newport Beach Surgery Center for almost six years and RN-Medical Oncology at Saddleback Memorial Medical Center for more than seven years. They first met in 2018. On September 5, 2019, Mike proposed to her.

He has a daughter, Stevie Pearl Pyle

Advertisement
born on December 14, 2019. Her parents, Mike and Lizzy organized a grand birthday celebration for her when she was turning one year in 2020.

Pyle is the founding partner of The Hunt Collection and owner of Mike Pyle Design.

‘I specialize in all aspects of landscape design and consulting. I have been in the landscape field for over 15 years and understand all elements of construction and installation in order to design a beautiful and functional space for any project.’

Mike Pyle Inside Out

Mike is a co-host of the new HGTV series Inside Out alongside Carmine Sabatella. The seven-episode series will premiere on Monday, April 26, 2021, at 9 p.m. ET/PT. It follows Carmine, a real estate agent, and interior designer, and Mike, a landscape designer, as they each pitch their design plans to clients. The budget is set, so the guys must be persuasive to score a bigger chunk of the dollars to either max out the interiors or make the most of the outdoor spruce up.