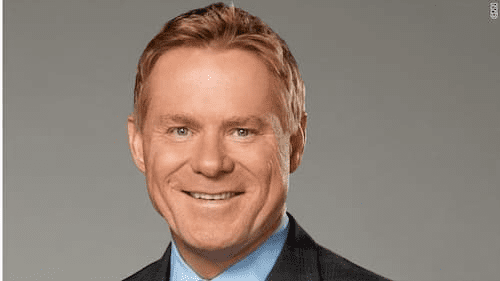 Michael Holmes is an Australian anchor and correspondent for CNN International based at the network’s headquarters in Atlanta. He joined CNNI in 1996 and he is anchoring CNN Newsroom with Michael Holmes since 2019. Previously, he anchored CNNI’s CNN Today with Amara Walker, the 10a ET edition of International Desk and he also co-anchored CNN USA’s Around The World at noon ET with Suzanne Malveaux.

His parents names are unknown. On November 11, 2020, Veterans day he celebrated his father who was an army officer. He also hasn’t shared whether he has siblings or not.

Holmes has been very personal when it comes to his wife. He has not mentioned her in any of his posts on his social media pages. Instead on several occasions on his Instagram page he has referred to Amara Walker as his TV wife . Amara walker is a journalist and news anchor. Previously, she anchored CNN International’s CNN Today with Michael Holmes. Walker is also married to a plastic surgeon Thomas Walker since April 2012. Michael and Walker hasn’t confirmed anything.

He has two kids, a son, McAuley Holmes and a daughter, Lily Holmes.

Holmes is an anchor and correspondent for CNN International based at the network’s headquarters in Atlanta. He anchors CNN Newsroom with Michael Holmes Friday through Monday mornings between 12 and 3am ET (5-8am GMT). Michael joined CNNI in 1996 as the first Australian anchor for the network and he has reported extensively from all corners of the globe including Asia, Europe, the Middle East, Mexico, India, Nepal, Africa, Pakistan and Afghanistan and has traveled to more than 80 countries.

Michael has covered numerous conflicts, including Iraq, Afghanistan, Libya, and the West Bank and Gaza. He reported on the war in Iraq from the very beginning, making more than a dozen trips there usually for weeks at a time. He also reported on all aspects of the war including the insurgency and occupation to the trial and execution of Saddam Hussein. In January 2004 he survived an ambush on a two-vehicle CNN convoy which left two CNN staff members dead and one wounded.

Before joining CNNI, Holmes worked for Australia’s Nine Network, and was one of the few Australian journalists to cover firsthand the 1994 Rwandan genocide. He was also based in London for four years as the network’s European correspondent for current affairs, covering such events as the fall of the Berlin Wall, the first Palestinian intifada, Northern Ireland and the start of the first Gulf War.

After working in newspapers for nearly five years, he began his television career in 1982 with the Nine Network in Perth. He also has worked for several British media outlets, including WTN, The Observer newspaper and TV-AM. He began his career at the age of 17, as a cub reporter with the Daily News, an afternoon newspaper in Perth.

In the fall of 2016 Holmes spent several weeks in Iraq covering the Iraqi-led offensive to recapture Mosul from ISIS. His reporting contributed to a 2016 Peabody Award for CNN, recognizing the networks’ coverage on the Battle for Mosul, ISIS in Iraq and Syria and Undercover in Syria.

He anchored CNN’s breaking news coverage of the terrorist attacks in Paris in 2015, which was recognized with a 2016 Royal Television Society (RTS) Award for ‘Best Breaking News Coverage.’

In 2007, CNN’s award-winning documentary On Assignment: Month of Mayhem revealed a behind-the-scenes look at Holmes reporting in Iraq during what would later become one of the bloodiest months since the war started in 2003.

He has also covered numerous natural disasters including Hurricanes Sandy, Michael, Irma and Maria, with coverage of the latter two earning an Edward R. Murrow Award. His reports in Bucharest during the miners’ uprising in 1990 earned him an Australian Television Society Award for Coverage of a Current Affairs Story.

His net worth is ranging between $1 million to $5 million.