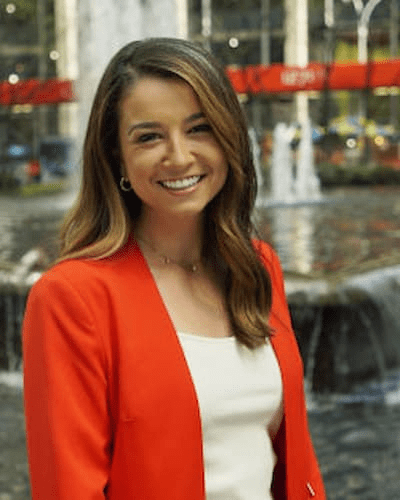 Maura Barrett is a media personality serving as a reporter at NBC News, across all platforms. Before that, she was a 2020 campaign embed reporter and previously produced for NBC’s Business & Tech unit, after starting in breaking news.

Barrett is American by nationality.

She graduated from Boston University with a major in Broadcast Journalism and a minor in French in 2016. While in college, she was involved with Inside Boston on BUTV. She also interned in the digital media department at CBS Boston (WBZ-TV) and production coverage at NBC News and at NPR in Chester Springs.

Maura is the daughter of Francis and Deborah Barrett. She grew up in Chester Springs, Pennsylvania with her brother, Connor Barrett. Connor is a track and field athlete. He studied agricultural business at Penn State and spent almost two years in Uganda as a Peace Corps agriculture volunteer.

Her grandfather, Francis Barrett Sr., had worked with the Philadelphia Electric Company for three decades and was a member of multiple associations for gas engineers. He also served in the Pennsylvania Army National Guard before he passed away in 2017.

She has managed to keep her personal life away from the limelight. Therefore, it is not known whether she is married, single, or in a relationship.

Barrett is a reporter at NBC News, across all platforms. She joined NBC News in March 2016 as a researcher in the Northeast Bureau. Prior to her current position, she was a 2020 campaign embed reporter and previously produced for NBC’s Business & Tech unit, after starting in breaking news.

She has also traveled all over the country in the pursuit of good journalism – covering the historic 2020 election from battleground (& troublemaker) states Iowa and Pennsylvania, following the country’s reaction to racial injustice and the political response, and focusing on how policy impacts people: making stops at farms & manufacturing plants in the Midwest to discuss tariff impacts, & events like CES and SXSW to reflect on the interference of technology in today’s world.

In her spare time, she tries to experience new countries & cultures as often as possible, play viola in a community orchestra, and train to run her latest half marathon.