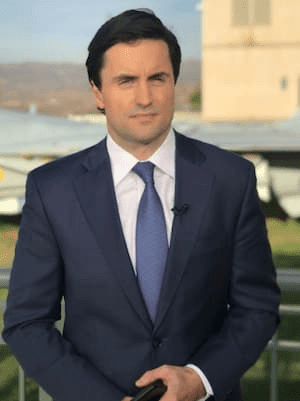 Lucas Tomlinson is a media personality serving as a correspondent for FOX News Channel (FNC) based in Washington, DC. Previously, he was a producer based at the Pentagon since 2017 where he also made on-air appearances.

Tomlinson is American by nationality. He also belongs to the white ethnic group.

Tomlinson graduated from the US Naval Academy in 2001.

Growing up in Chappaqua, New York, Tomlinson had a deep-rooted passion for service and giving back that began with his family. His uncle was a fighter pilot during the Vietnam War; it was those stories and seeing his old uniforms which would leave a lasting impression.

However, there is no information about his parents and siblings.

Lucas is married to his wife Anne Tomlinson. The couple has three kids including their son Davis. She gave birth to a bouncing baby boy in November 2021.

Tomlinson serves as a correspondent for FOX News Channel (FNC) based in Washington, DC. He was named to the position in January 2022 and previously served as a producer based at the Pentagon since 2017 where he also made on-air appearances.

Most recently, Tomlinson contributed to FNC’s live coverage surrounding Russia’s invasion of Ukraine, providing 24/7 coverage live on the ground in Lviv, Ukraine, where the US Embassy moved its operations. In August of 2021, he contributed to the network’s coverage surrounding the withdrawal of American troops from Afghanistan, breaking the news on the US drone strike targeting an ISIS-K planner in the Nangarhar Province in eastern Afghanistan. He also extensively covered the suicide bomb attack outside the Abbey Gate at Kabul airport in Afghanistan as the news was rapidly unfolding on what would be one of the deadliest days for American troops in 10 years.

While serving in his former role, Tomlinson reported daily from the Pentagon, where he attended press conferences and presented on-camera questions to senior military leaders, including Department of Defense Press Secretary John Kirby and Air Force Lt. General Sami D. Said on a range of breaking news throughout the military. He had many notable on-camera exchanges with Secretary Kirby on the topic of American troops in Afghanistan and the Taliban.

Before joining FNC in 2014, he served on a human terrain team with the US Army’s 3rd Brigade Combat Team 10th Mountain Division in Kandahar Province, Afghanistan. In 2011, Tomlinson received a medal at the Human Terrain Team Awards for his hard work and dedication to his team.

Was Lucas Tomlinson in the Military?

Yes, Lucas served in the military before he ventured into his journalism career.

Growing up in Chappaqua, New York, Lucas had a deep-rooted passion for service and giving back that began with his family. His uncle was a fighter pilot during the Vietnam War; it was those stories and seeing his old uniforms which would leave a lasting impression.

After his time on the ship, he taught at the Naval Academy before leaving the service to work for the Department of Defense.

“I ended up going to Afghanistan for almost a year, working with the 3rd Brigade Combat Team, 10th Mountain Division on a Human Terrain team. It was an incredible experience,” Lucas said.

He spent much of his time on the ground, interviewing locals with an interpreter and writing reports on the locals to better understand the population. It was vital to research and data for the Armed Forces missions on the ground and it was his time there that would lead to his career in journalism and eventual role with FOX News in 2012.