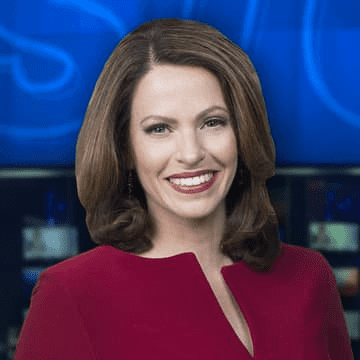 Kerry Kavanaugh is an award-winning media personality serving as an Anchor and Investigative Reporter at Boston 25 News. She joined the team in 2015. Previously, she was a Reporter and Anchor at WSB-TV.

Kavanaugh graduated from Boston College with a degree in Communication and Media Studies in 2000.

Kerry is the daughter of Paul Kavanaugh Sr. She was born and raised in Medford, Massachusetts. She has two siblings, a brother named Paul Jr. and a sister named Lori Rosen. Her father died in June 2021. He suffered from Dementia for a long time before he passed on.

Kerry is married to her husband Jason Solowski, an Investigative Content Producer at NBC 10 Boston. In 2018, Kerry shared the couple’s struggles to get pregnant and how she went through the process of IVF before having her daughter, Khloé Rose on January 15, 2019.

Kerry is an award-winning Anchor and Investigative Reporter at Boston 25 News. She joined the team in 2015, bringing her back home to Boston. Kerry moved back just in time for the historic winter of 2015 that saw more than 100 inches of snow, crippling mass transit.

Since the start of the COVID-19 pandemic in 2020, Kerry has been on the frontlines exposing how the crisis was impacting people living and working in nursing homes, conditions inside prisons and jails, the impact of remote learning on students, and the obstacles many faced getting a vaccine once those became available in Massachusetts.

Kerry works to give all members of the community an opportunity to have their voices heard, especially young people. She’s produced, written, and anchored multiple Emmy-nominated in-depth specials examining the youth mental health crisis, the teen vaping crisis, and the uncertain futures that persist for young immigrants brought to the United States as children, known as ‘Dreamers’.

In 2021, Kerry was awarded a regional Edward R. Murrow Award for News Documentary. ‘The Murder of Amanda Dabrowski’ chronicled a deadly case of domestic violence that resulted in Massachusetts lawmakers proposing legislation to enhance workplace protections for domestic violence victims.

Also in 2021, Kerry was one of 10 local reporters nationwide to receive an invite to the White House to interview the First Lady and help bring the holiday decorations of the East Wing to the public, since tours were still canceled due to the pandemic.

In her original series, ‘Coffee with Candidates’, Kerry interviewed every Democratic presidential candidate, including President Joe Biden, and nearly every Republican candidate ahead of the 2020 election. Since then, she’s expanded the franchise to include Massachusetts Senate races and this historic Boston mayoral race in 2021, which saw the first woman and person of color elected Mayor of the city. This series earned Kerry an Emmy nomination for political reporting.

She’s also been on the front lines of major, national news stories. In 2015, she traveled to Philadelphia after a train derailed, killing eight and injuring more than 200 people. While there, Kerry dug into the issue of train safety and the slow implementation of “Positive Train Control” which may have prevented that tragedy. Kerry played a key role in Boston 25’s 2016 Election coverage. She was inside the Javits Center in New York City when Hillary Clinton supporters watched the results roll on that historic election night. Later, she was in place at the head of the inaugural parade route in Washington D.C. the day President Donald Trump was sworn in. Kerry was on the ground in Manhattan on Halloween, 2017 hours after a terrorist rented a box truck and drove down the bike path on the West Side Highway.

Kerry joined Boston 25 from WSB-TV in Atlanta, Ga. She was the first reporter on-scene when a gunman took four firefighters, hostage, after making a bogus call for help. Her coverage of the hours-long standoff earned her an Emmy nomination. Kerry tackled complex, personal stories as the immigration debate churned in Georgia. WSB-TV also dispatched Kerry to cover major national stories including the tragedy in Sandy Hook in 2012 and the Boston Marathon bombing in 2013. Kerry was a Consumer Investigative Reporter and anchor at WFTS-TV in Tampa, Fla. In Tampa Bay, she covered Florida politics and consumer issues. In 2009, the Society of Professional Journalists awarded her first place for consumer reporting in Florida. While at WHO-TV in Des Moines, Iowa, she traveled to Villachuato, Mexico to reconnect with undocumented immigrant workers after their meatpacking plant was raided and they were deported. The Associated Press of Iowa and the Iowa Broadcast News Association honored her series of stories with first-place documentary awards. Kerry got her start in journalism in the Mountain West in Bozeman, Montana. She was a one-woman show: shooting, writing, and editing all her own stories.

Kerry’s an alumna of the RIAS German/American Exchange Program. The program awarded her a journalism fellowship in 2004. She traveled to Germany, where she participated in a journalism immersion program and produced a series of stories.

Kerry has served as a mentor through Boston Partners in Education and the Council for Women of Boston College. Kerry also serves on the board of Resolve New England, which advocates for people struggling to start or grow their families. In 2018, Kerry shared her and her husband’s own struggles to get pregnant and how she went through the process of IVF before having her daughter, Khloe in 2019. She loves hearing from people who continue to share their stories with her.

Kerry is a native of Medford, Mass., and graduated from Boston College. Let’s go Eagles! She’s so excited her journalism career brought her back home to cover the city she loves. Kerry is fluent in Spanish and says that helps her tell stories from a variety of communities. She loves traveling and trying new restaurants.