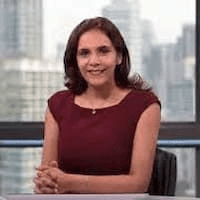 Karishma Vaswani is a media personality serving as the Chief Asia Presenter of News Day and Asia Business Report on BBC. She is also the BBC’s Asia Business Correspondent based in Singapore. Previously, she was the Indonesia editor for the BBC World Service in Jakarta.

Vaswani is around 45 years old. She was born in Singapore and raised in Indonesia. However, her birthday is unknown.

Vaswani is both Indonesian and Singaporean.

Vaswani went to primary school and high school in Jakarta. From 1990 to 1995 she attended Jakarta Intercultural School. She also graduated from the University of Warwick in 1998 with a Bachelor of Arts in English Literature.

Karishma was born in Singapore and raised in Indonesia.

During an interview when asked what brought her to Indonesia in 2009, she said; “I moved here from India in 2009 with the BBC, but I lived here before as a child and my parents have been in Indonesia for a long time.”

Karishma was the first girl in her family to get a job.

“I was the first girl in my family to go and get a job and it’s really encouraging that my daughter feels it’s possible to do all this,” she said.

Karishma is married and has two kids, a daughter, Aryana, and a son, Krishna. Her husband runs his own business in digital marketing and he’s operating between Singapore and Jakarta.

“My husband runs his own business in digital marketing, so he’s between Singapore and Jakarta,” she said.

Vaswani is the BBC’s Asia Business Correspondent based in Singapore, covering the region from there. She has in this role interviewed some of the most important figures in Asian business news including Indonesia’s President Joko Widodo, the former Malaysian Prime Minister Mahathir Mohamad, Japan’s Central Bank Governor Haruhiko Kuroda, the head of China’s Asia Investment Infrastructure Bank Jin Liqun and India’s former central bank governor Raghuram Rajan.

Most recently, she was the Indonesia editor for the BBC World Service in Jakarta and before that, the BBC’s Indonesia correspondent from 2009 to 2014, covering stories including the July 2009 Jakarta bombings and the five-year anniversary of the Aceh tsunami.

Before working in Jakarta, Vaswani was the first presenter of India Business Report, BBC World News’ business programme dedicated to examining the issues of trade, business, and economics in India. She was also the first Mumbai-based business correspondent to report for BBC World News and she covered the Mumbai bombings in 2006 and 2008 and the elections in 2009.

Vaswani is also a regular presenter at international conferences and symposiums chairing high-level discussions and hosting events such as the BOAO Forum and APEC CEO Summit.

She joined the BBC in 2003 as a producer and reporter for Asia Business Report and World Business Report, working out of Singapore. Prior to working for BBC World News, she worked at CNBC Asia.

Karishma Vaswani Salary and Net Worth