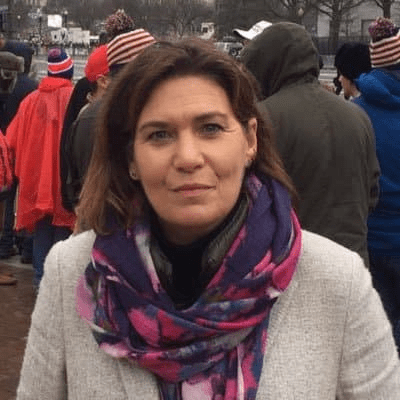 Juliet Bremner is a media personality serving as ITV News Correspondent. Previously, she was a reporter on BBC Two’s Newsnight.

When Was Juliet Bremner Born?

It is not known when and where she was born.

Bremner is British by nationality.

There is no information about her educational background. Nonetheless, it is believed that she is highly educated because of her career.

Bremner hasn’t shared any information with the public about her parents. She hasn’t also disclosed whether she has siblings or not.

Juliet was married to Robert Anthony Simpson (Bob Simpson), a broadcast journalist and a man who was 20 years older than her. They tied the knot in 1996. Previously, Robert was married and had two children, a son, Jack, and a daughter, Kate, with his first wife.

During a conversation with his friend, when his son was about to leave school and begin an internship with a London architect’s firm, Robert said the only th ing he was proud of in his life was the way his kids were turning out. It was a rare glimpse of the private romantic behind that fast-living, cavalier front.

Bremner is a News Correspondent at ITN. She joined the network in 1997. Prior to joining ITN, Bremner spent six months in 1995 working on BBC Two’s Newsnight as a reporter.

She began her career in print journalism as a general news reporter for the Oldham Evening Chronicle. She subsequently moved to radio, joining Piccadilly Radio in Manchester as a news reporter.

In 1987, she joined BBC Television and spent five years working with BBC North West, first as a presenter/reporter for North West Tonight and then as Merseyside Correspondent, reporting for both regional and national television on stories such as the Hillsborough disaster, Militant and Liverpool City Council strikes and the Lockerbie crash.

In 1992, Bremner moved to BBC News and Current Affairs Radio as a reporter, based at Broadcasting House, London. She worked on a range of programmes including Today, The World at One, PM, World Tonight, and Newsbeat. For six months she was based in New York.

In 1993, she became a bi-media News Correspondent working for BBC television and radio, during which time she covered a range of breaking stories both at home and abroad. From 1993 to 1996, she reported from Rwanda, Bosnia, and Northern Ireland and covered stories such as the Waco disaster in the US, the Estonia Ferry disaster in Sweden, and animal rights demonstrations during 1994/95.

Juliet Bremner Salary and Net Worth