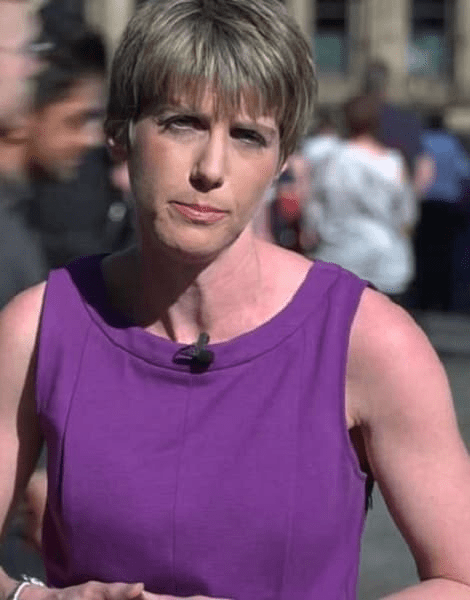 Judith Moritz is an award-winning media personality serving as BBC’s North of England Correspondent. She produces news items for the internet, TV, and radio channels.

For your ears on Xmas eve – the work of excellent reporter (and husband!) @nicholasgarnett https://t.co/pQzHU81yDm

In 1995 Judith graduated from Withington Girls’ School. She also earned a degree in English Literature from University College London (UCL). During her time at UCL, she was heavily involved in the University newspaper.

Moritz was born and raised in Manchester however there isn’t much information about her family.

On April 7, 2021, she wrote alongside a post on Instagram; “Tonight on #yomhashoah I light this #yellowcandle in memory of 19-year-old Willem Preso and my great grandparents Maximillian and Clara Hermine Moritz, who was murdered in the #Holocaust. May their memories be a blessing.”

Judith is married to Nicholas ‘Nick’ Garnett, a radio broadcaster with the BBC. His main role is as the North of England reporter for BBC Radio 5 live, the news and sports network of the BBC. He was born in October 1964 in Liverpool, England. He also grew up in Liverpool and he has worked for a number of local radio stations.

The couple has two daughters and together they live in Manchester.

A quick mention today for my husband @nicholasgarnett who is covering events in Nepal for @bbc5live this week. Follow him for pix and info.

Moritz is the BBC’s North of England Correspondent. She produces news items for the internet, TV, and radio channels. During her time in this role, she has covered many major stories, including the Raoul Moat shootings, the Shipman Enquiry, and the 2004 Morecambe Bay Cockle Pickers Disaster.

Moritz decided to pursue a career in TV journalism, preferring the immediacy of the format to print journalism, and following work experience at Granada Reports prior to her graduation. She then faced the choice between continuing her studies with a Postgraduate Diploma in Journalism or accepting a place on the BBC Journalism Training Scheme, opting eventually for the paid one-year BBC traineeship.

The scheme gave her an excellent grounding in how to produce news stories ready to air, and how to generate creative, issue-led stories that could be included in the daily news programmes. She continued with the BBC, moving between regional news programmes in Norwich, Cambridge, and Essex, and sealed her reputation with her award-winning coverage of the 2001 Foot and Mouth Crisis, where she appeared nightly on the BBC’s national news programmes.

Eleanor undertook various roles at the station, including presenting and producing the Breakfast Show. She eventually became News Editor there. On leaving, Eleanor joined North West Tonight and is now the Producer and Presenter.

However, it is not clear whether she is related to Judith. None of them has come out to clarify the rumors.

Judith Moritz Salary and Net Worth