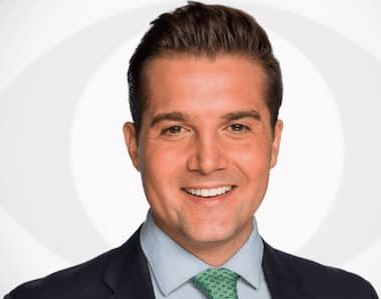 John Dias is an American two-time Emmy Award-Winning Reporter for CBS New York. He joined CBS New York in November 2017. Previously, he was an anchor/reporter at News 12 Networks from October 2013 – November 2017.

Dias is 33 years old as of 2022. However, he hasn’t revealed when and where he was born. It is also not known when he celebrates his birthday.

During his senior year, he juggled both classes and a full-time job as a web producer for News10 ABC in Albany, New York.

John, a Long Island native, is the son of Jackie Dias. His father died nearly four years ago.

Dias is the husband to Jason Bachman, a personal trainer at Crunch Gym in New York City. The couple lives on the Upper West Side with their dog, Belle.

Dias is openly gay. He first came out as gay 10 years ago when he was 23 years old to his mom, Jackie before the two of them broke the news to his father.

“I knew that it would be an adjustment. It was a hard pill to swallow, at first,” his mom said.

“How were you feeling then?” Dias asked his mom.

“I would say I was shocked, but not totally surprised,” she said.

Many emotions were going through her head, ups and downs and plenty of worries.

“I didn’t want you to be discriminated against,” she told Dias.

Love overshadowed it all when Dias and his mother told his father.

“He said to me, ‘I don’t care. You’re the same person you were when you first walked in here. You’re not any different. I love you just the same,'” Dias said.

John is a two-time Emmy Award-Winning Reporter for CBS New York. He landed his first on-air job as a multimedia journalist at KREX-TV in Grand Junction, Colorado. There, he chased wildfires, reported on politics and stories that made history, like the Aurora Theater shooting. He shot, wrote and edited his own stories.

Prior to joining CBS New York in November 2017, he was an anchor/reporter at News 12 Networks for almost five years. He covered breaking news and crime. He was also the first to uncover the story about a deadly Legionnaires outbreak in the Bronx, and the biggest gang takedown New York City has ever seen.

When John is not pursuing news stories, he loves to travel with his family and friends. Montauk, New York, and Telluride, Colorado, are his two favorite places in the world. He’s an avid runner and completed his first marathon in 2019.

He grew up watching CBS New York and is thrilled to cover news in the Tri-State Area.

John Dias Salary and Net Worth