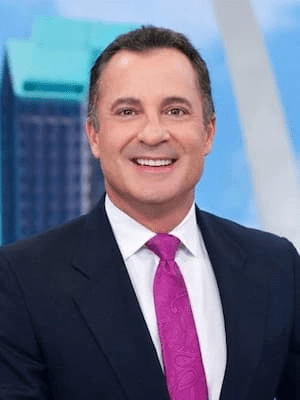 John Brown is a media personality serving as an anchor on FOX 35’s evening newscasts. He is also a nationally recognized TV journalist, public speaker, radio talk show host, author, and inventor. Previously, he co-anchored Good Day Orlando on FOX 35 with Amy Kaufeldt from 2009 to 2016.

He graduated from Central Methodist University with a degree in Biology and a minor in Chemistry. He was ready to begin medical school in 1994 but followed his passion for news instead. From 1996 to 1997, he studied Communications at Barry University.

John is a native of Missouri. When asked about lessons he learned from his father, he said;

“My dad was great about meeting people. He was able to walk into a room full of strangers and leave with a room full of friends. He taught me not to be afraid to approach people because all of us, generally, want to be approached.”

John is married and has two daughters, Lauren and Sophia. He is an avid runner, has competed in dozens of marathons and half-marathons, and enjoys warm weather, golf, and studying history.

“I do my best to make sure that my kids k now ─ beyond a shadow of a doubt ─ that I always have their backs. I want them to know that they never have to be afraid to come to me first when times get tough and I always knew that, no matter how bad things got, I could always call my dad and I want my kids to have that same relationship with me,” he said.

Brown is an anchor on FOX 35’s evening newscasts. He is a nationally recognized TV journalist, public speaker, radio talk show host, author, and inventor. Previously, he co-anchored Good Day Orlando on FOX 35 with Amy Kaufeldt from 2009 to 2016, during which time the two were named to several “Best Of Orlando” lists. He also made worldwide headlines with his Kardashian “Walk Off” in 2015 which has been seen by an estimated 40,000,000 viewers.

Before returning to Central Florida in 2021, Brown was a reporter and anchor at KTVI-TV, FOX 2 in St. Louis, and was named “Best Large Market News Anchor by the Missouri Broadcasters Association in 2020.

In 1999, he began working at KSPR-TV in Springfield, Missouri, where he was named the morning show anchor of a start-up newscast called The Morning Scoop. In 2003, he was promoted to evening news anchor where he remained until 2004.

After five years at KSPR, he landed the job as host of the nationally syndicated TV show The Daily Buzz, based in Orlando and seen in 150 cities across the country. In 2009, he became an anchor and reporter at KTVI, FOX 2. During this time, he also hosted a talk radio show on KTRS-AM called John Brown’s Mindset.