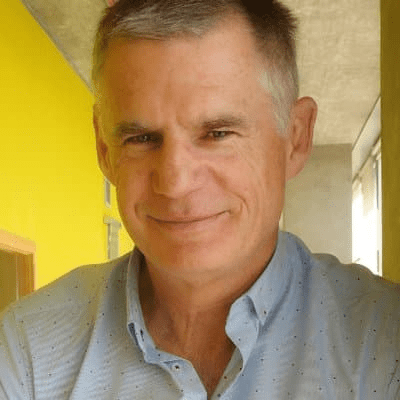 John Beattie is a media personality serving as a BBC Presenter. He presents The Nine on Fridays alongside Laura Miller. He also hosts a lunchtime show of news, comment, and discussion on BBC Radio Scotland. Additionally, he is the host of the sports magazine programme Sports Nation on both radio and TV. Previously, he was a rugby player.

Beattie attended a boarding school in Penang, Malaysia. When he was 11 years old his family returned to Scotland and he went to the Glasgow Academy. He also studied at the University of Glasgow and gained a degree in Civil Engineering.

John was born to Scottish parents in North Borneo. His father was a manager of a rubber estate. He was a big, rough man, a gardener from Glasgow who went to Borneo in his early twenties to work as a rubber estate manager.

“He was my hero, and yet my brothers and I knew that the toughness that was part and parcel of him was softened by a congenital heart problem that came to haunt him in his sixties,” John said.

“Our family came back to the UK when my father was around forty, he retrained as there was very little call for rubber planting in the West of Scotland, ran a marathon, took up squash and fencing, worked far too hard to put the three of us through private school, and then after he retired picked up hobbies like archaeology while studying for two degrees at the same time,” he added.

John’s father graduated. However, a day after his graduation celebration party he passed on.

He was raised up alongside his two brothers.

John has been married to his wife Gill. Together, the couple has three children. A son, Johnnie, and two daughters Jenny and Julie.

Johnnie was born on 21 November 1985 and is a Scottish former rugby union player. A number 8, he played for Glasgow Warriors, Montpellier, Castres, and Bayonne. After he retired from rugby, he currently hosts Le French Rugby Podcast, a rugby podcast about French rugby with Benjamin Kayser

Jenny on the other hand was born on 13 May 1991 and is a Scottish professional footballer who plays for Arsenal of the FA WSL and the Scotland national team. In October 2020, she was diagnosed with breast cancer. She had surgery to remove the lump and, as cancer had not spread, began radiotherapy instead of chemotherapy.

Despite the treatment, Jenny continued to appear for both Arsenal and Scotland. In 2021, she won the Helen Rollason Award in recognition of her work since the cancer diagnosis.

Beattie is a Radio and TV host for BBC Scotland. After retiring from rugby, he moved on from civil engineering and retrained as a chartered accountant, before moving into broadcasting in 1995.

Beattie works as a commentator or presenter for rugby on television and radio. He also hosts a lunchtime show of news, comment, and discussion on BBC Radio Scotland. Additionally, he is a host of the sports magazine programme Sports Nation on both radio and TV.

He writes a rugby blog on the BBC’s rugby union website and has written for The Herald, Sunday Herald, and Scottish Rugby Magazine.

In 2003, Beattie was chairman of the Scottish government physical activity task force to improve the health of the nation through exercise and oversaw a review in 2008, ‘Let’s Make Scotland More Active’. In 2010, Radio Scotland announced that he would host the “John Beattie Show”, a 75-minute show four days a week.

Since 2019, Beattie serves as a presenter on BBC Scotland’s news programme The Nine.

John Beattie Salary and Net Worth