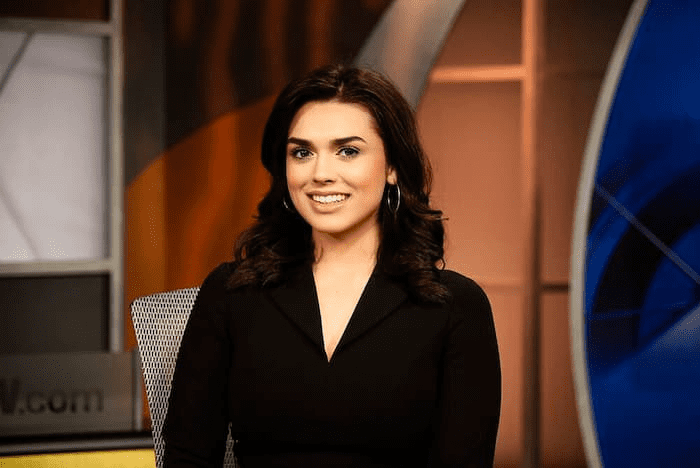 Jiani Navarro is a media personality serving as a weekend morning anchor and reporter at WALA-TV Fox 10 in Mobile, Alabama. Previously, she was the evening news anchor for Fox47 in Lansing, Michigan.

She was born in sunny Glendale, California. However her age is unknown.

Navarro is a proud Brazilian, Mexican, Spanish and Armenian.

Between 2014-2016, Jiani attended Glendale Community College. She also graduated from California State University, Northridge (Once a matador, always a matador) with a degree in Broadcast Journalism and a degree in Communication Studies in May 2019.

During her time at CSUN, Jiani was an entertainment radio host for KCSN 88.5 Latin Alternative and worked with the “Valley View News”, reporting and anchoring newscasts. She was also involved with multiple clubs; Armenian club, Lebanese club, Radio Television Digital News Association and was a member of the Panhellenic sorority, Alpha Xi Delta.

Jiani was born and raised in sunny Glendale, California. She has also posted her parents a couple of times on social media. However there is little information about her family.

She also has a younger sister.

Navarro isn’t married. However she is in a relationship with an unknown guy. Despite posting their love on social media, Jiani hasn’t revealed the name of her man.

Jiani is a weekend morning anchor and reporter at WALA-TV Fox 10. She joined the network in January 2021 and she is based in Mobile, Alabama, United States.

Prior to joining WALA-TV Fox 10, Jiani was the evening news anchor for Fox47 in Lansing, Michigan.

After College, Jiani began her journalism career working as a radio co-host and social media strategist for “Fan Truth”, a sports show that airs on the Los Angeles based broadcasting platform, DASH radio. After working for DASH radio, Jiani moved to Casper, Wyoming to work as the evening news anchor, producer and reporter for the ABC affiliate, KTWO-TV. Jiani was in charge of producing, writing and anchoring the 5pm, 6pm and 10pm newscasts.

While working at KTWO, Jiani hosted the political talk show, “Report to Wyoming”, where she was able to interview and develop good relationships with Wyoming’s Governor, Mark Gordon, Former U.S Representative, Cynthia Lummis and U.S State Senator, John Barrasso. She was also the first on the scene when Casper held its first Black Lives Matter march in the wake of George Floyd’s death while working as a reporter.

Jiani Navarro Salary and Net Worth