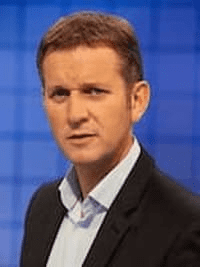 Jeremy Kyle is a media personality serving as a broadcaster and writer. He is known for hosting the tabloid talk show The Jeremy Kyle Show on ITV from 2005 to 2019. He hosted a US version of his eponymous show, which ran for two seasons beginning in 2011.

He attended the Reading Blue Coat School, a boys’ independent schooling in Sonning, Berkshire. He later attended Surrey  University in Guildford where he graduated with a bachelor’s degree in history and sociology.

He was born and raised in Reading, Berkshire by his parents Patrick Kyle and Nan Kyle. His father was an accountant and personal secretary to the queen’s mother for forty years. He has a brother named Nick whom He claims to have experienced drug addiction.

Kyle first got married to Kirsty Rowley in 1989 this was short- live because of his addiction to gambling, which made him accumulate a debt that picked to £12,000 and took some years to pay off. He then married Carla Germaine in 2002. The two separated amicably in 2015. Their divorce was confirmed the following February. They had three children. He also had a daughter from his first marriage.

He later announced his engagement to Vicky Burton, his children’s former nanny, in February 2018. They are eventually married and in February 2020 they welcomed their first child together.

His children include Harriet, Ava, Henry, and Alice.

He returned to screens with his own TalkTV show, three years after his ITV daytime program was axed over the death of guest Steve Dymond.

A former guest of the ITV show who was ‘highly provoked’ into headbutting a love rival on the reality show called the decision to let him back on air ‘shameful’ this week.

The presenter appeared on television in the UK for the first time in three years on Monday as he helped to launch the new channel with a cameo appearance on the hour-long panel debate show The Talk with Sharon Osbourne.

From 1986 to 1995, Kyle worked as a life insurance salesman, recruitment consultant, and radio advertising salesman. He then became a radio presenter and after working at Orchard FM in Taunton, Somerset, and Leicester Sound in Leicester, he was signed by Kent’s Invicta FM in 1996. In 1997, he joined BRMB in Birmingham, presenting the shows Late & Live and Jezza’s Jukebox.

In 2000, he moved to the Century FM network, taking this format with him. The show was called Jezza’s Confessions. It was broadcast between 9 pm and 1 am. He won a Sony Award for Late & Live in 2001. On 1 July 2002, he made his first broadcast on Virgin Radio, presenting Jezza’s Virgin Confessions every weekday from 8 pm to midnight. In mid-2003, he broadcast the show from 9 pm to 1 am every weekday, and in January 2004 the show went out from 10 pm to 1 am, Sunday to Thursday.

He left Virgin Radio in June 2004. From 5 September 2004, he presented the Confessions show on London’s Capital FM. The new program aired Sunday to Thursday from 10 pm to 1 am with live calls on relationship issues of all kinds. Capital Confessions came to an end on 22 December 2005 to make way for The Jeremy Kyle Show, a similar show which ran from January 2006 to December 2006.

In late 2007, Kyle began a new show (“The Jeremy Kyle Show”), broadcasting across GCap Media’s One Network, of which Orchard FM, Invicta FM, and BRMB, his previous employers, were a part. The program differed from his previous shows in that he interviewed celebrities. Kyle also began broadcasting a new program, on Essex FM, in November 2007. Kyle joined Talksport on 21 September 2008 to present a lunchtime sports show every Sunday called The Jeremy Kyle Sunday Sports Show. As a result of Talksport’s Premiership coverage on a Sunday, his show was canceled, and he left the station.

The Jeremy Kyle Show is a British tabloid talk show presented by Jeremy Kyle and produced by ITV Studios. It premiered on the ITV network on 4 July 2005 and ran for seventeen series until its cancellation on 10 May 2019. It was the most popular program in ITV’s daytime schedule, broadcast on weekday mornings and reaching an audience of one million. It replaced the chat show, Trisha, following its move to Channel 5 in 2004.

The show was based on confrontations in which guests attempt to resolve personal problems, often related to family and romantic relationships, sex, and addiction. It featured psychotherapist Graham Stanier, who assisted the guests during and after the show’s broadcast, along with the use of lie detectors, despite a lack of scientific evidence supporting the use of the equipment.

The Jeremy Kyle Show became controversial for placing guests in confrontational situations, with Kyle often chastising guests whom he felt had acted in morally dubious or irresponsible ways and stressing the importance of traditional family values, while guests frequently displayed strong emotions such as anger and distress. Despite ITV disputing claims that guests were mistreated on the program and misled by researchers, a judge described the program as “human bear-baiting” during the prosecution of guests who had a violent altercation on the program. On 15 May 2019, the program was canceled following the death of a guest, whose appearance had been filmed the week before but not aired.

In 2012, he was diagnosed with testicular cancer. He received chemotherapy and underwent surgery to remove the affected testicles. In 2021 he became diagnosed with anxiety disorder after the Jerry Kyle shore became axed.

Her annual Salary is under review.

He has an estimated Net worth that ranges from £ 1 million to £5 million.

Jeremy Kyle is to make a triumphant return to radio with a new, UK focused, current affairs programme. Tune-in to the first Jeremy Kyle Radio Show this Saturday 18 August, 1pm on DAB, online via https://t.co/5yZwXs3Ntc , and mobile. pic.twitter.com/68VBOduDD1