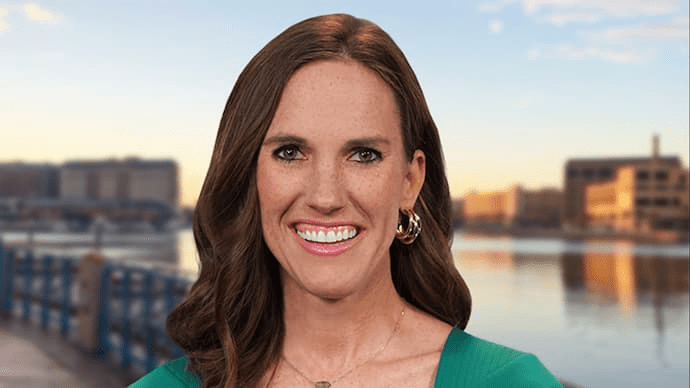 Jennifer Titus is a media personality serving as an Investigative reporter at 10Tampa Bay, the CBS Affiliate in Tampa, Florida. She joined the team in October 2013. Previously, she was a reporter at Hoak Media Corporation.

Titus is American by nationality.

She is a graduate of Manatee High School. She then went to Florida Atlantic University on a track and cross country scholarship and graduated with a Bachelor of Science (B.S.) in Mass Communication/Media Studies in 2008.

Jennifer was born and raised in Bradenton. Most of her family is still there. However, their identities are unknown.

Jennifer is married to Matthew Titus. Together they have two sons, Mauer Titus and Maris Abraham Titus. Maris, the second born was born on January 30, 2019, at Mease Countryside Hospital.

During an interview, Jennifer said that Maris was a pound and half bigger than his brother was at only one week old.

“Perfect at only a week old! He’s a pound and half bigger than his brother was, weighing in at 7 pounds, 9 ounces. He is eating and sleeping great.”

Titus is an Emmy Award-winning Investigative Journalist for the Investigative team at 10Tampa Bay, the CBS Affiliate in Tampa, Florida. She joined the team in October 2013. Her stories have had a major impact both locally and statewide.

In February, her reporting uncovered Florida Inmates taking part in the nationwide robocall problem. Now lawmakers are in the process of drafting bills to revamp the entire work release program in the state.

In November 2020, a report on an error that left a triple murder suspect out on the streets had the state’s attorney demanding to change the way courts are run in a local county. That year, lawmakers also passed a law that protects our most vulnerable in nursing homes after her investigation uncovered a loophole that let CNAs under investigation for sexual assault at multiple facilities continue to work.

Jennifer’s work over the years has also led to major changes at a county fire department when it comes to training to testing at local schools for a cancer-causing gas. She’s also covered stories including the shootings at the Fort Lauderdale Airport and Pulse Nightclub, the collapse of the high-rise condo in Surfside, and multiple hurricanes including Harvey in Houston.

Her work has been recognized by the Suncoast Emmy Chapter, Florida Broadcasters Association, The Green Eyeshade, Associated Press, and Society of Professional Journalists Florida Chapter.

Jennifer Titus Salary and Net Worth