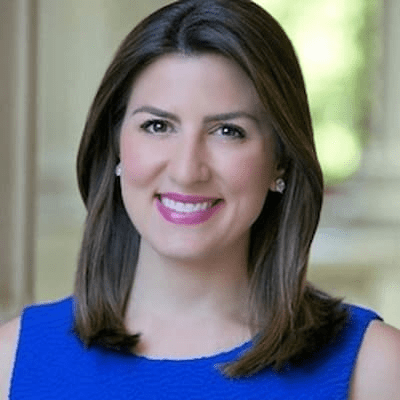 Jacqueline Policastro is a media personality serving as the Washington Bureau Chief since September 2014 covering both the Congress and White House and campaigns for Gray-owned television stations throughout the USA. Previously she worked as a TV Reporter for Lilly Broadcasting Erie, PA.

Born and raised in New Jersey, Policastro hasn’t disclosed how old she is, nor when she celebrates her birthday

She graduated from Boston University with a B.S. in Broadcast Journalism and Political Science. She also attended BU’s Sydney, Australia, and Washington, DC journalism programs.

Policastro has kept her family life a secret affair. It’s not clear who her parents are, and also hasn’t availed any info about her siblings.

She is happily married and lives with her husband and children in Washington. However, she hasn’t revealed the identities of the husband and kids.

Jacqueline created the Gray Television Washington News Bureau in 2014. She’s covered Congress and the White House for more than 15 years. She leads a team of reporters who provide daily, hyper-local coverage of Congress, the White House, and campaigns for Gray TV stations in 113 markets across the country. The stations collectively reach 36% of U.S. television households.

Jacqueline has reported on the ground during every presidential campaign since 2004. Some of the major political events she has covered include the Republican and Democratic National Conventions, presidential primaries and debates, election nights, and inaugurations. Jacqueline has also reported on impactful Supreme Court decisions.

Jacqueline has served as a Kneeland Fellow, Paul Miller Washington Fellow, NAB Professional Fellow, and a fellow with the International Women’s Media Foundation. She is a member of the Poynter Institute’s Leadership Academy for Women in Digital Media and has served as an executive board member of the Radio and Television Correspondents’ Association.