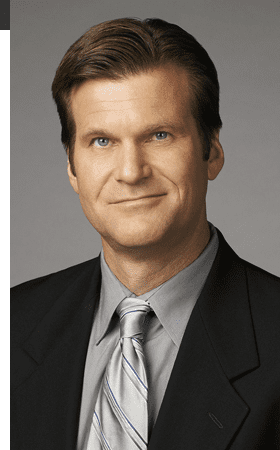 Drew Griffin is a correspondent for the investigative unit of CNN/U.S based in CNN’s world headquarters in Atlanta. He joined the network in May 2004 after working as an investigative reporter for CBS 2 News in Los Angeles for 10 years.

He has not revealed when he was born.

Griffin received a bachelor’s degree in communications from the University of Illinois at Urbana-Champaign.

There is no information about his parents and siblings. So it is not clear as to whether he has siblings or not.

Griffin is married to Becky Martin since April 2, 2005.

He has a son, Toby with his wife Becky and two stepsons, Joey and Wade from his wife’s previous marriage.

Griffin is a correspondent for the investigative unit of CNN/U.S based in CNN’s world headquarters in Atlanta. He joined the network in May 2004. Prior to CNN, he worked as an investigative reporter for CBS 2 News in Los Angeles for 10 years. He has a wide range of expertise in coverage of politics, as well as sports, corporate, and government investigations.

His recent investigations includes, how gerrymandering and so-called “Super Pacs” are impacting the election process and how some medical residents are cheating on the medical board certification tests for radiologists. In September 2005, he traveled to New Orleans to cover the aftermath of Hurricane Katrina. His reporting about the looting by some New Orleans police officers led to a police force investigation. He also broke stories surrounding nursing home deaths in the wake of Katrina.

Griffin’s work as an investigative reporter has taken him across the world enabling him to cover a famine in Somalia, illegal drift net fishermen in Singapore and Los Angeles gang members in El Salvador. He has interviewed U.S. and Russian presidents. Griffin reported from New York City for CBS 2 News after the September 11 terrorist attacks and from Israel to cover the war on terrorism.

He began his reporting career as a reporter/cameraman for WICD-TV in Champaign, Ill. Since then, he has worked in Florida, South Carolina and North Carolina and Washington. He became an investigative reporter when he joined KIRO-TV in Seattle. He joined CBS 2 News in Los Angeles in January 1994, where he worked as a reporter and anchor and helped create the station’s investigative reporting team.

In 2015, Griffin earned a Peabody Award for his investigation into delays at Veterans Affairs hospitals. Griffin’s investigation revealed that at least 19 military veterans had died because of appointment delays, and thousands more were experiencing extremely long waits for treatment. As a result of the coverage, led by Griffin and CNN, VA Secretary Eric Shinseki resigned and other managers were fired. Congress also took action by passing legislation allowing veterans to seek care outside of the VA.

In December 2005, he won a national Emmy Award for business and financial reporting for his reports on a fault in Ford vehicles which allegedly caused them to catch fire. He earned his second national Emmy in 2006 for the CNN Presents documentary “How to Rob a Bank” and a third in 2007 for “Hidden Spending,” an Anderson Cooper 360° segment about congressional spending. In 2007, the Atlanta Press Club named him Journalist of the Year in the category of national television reporting, and the National Press Foundation gave him its Everett McKinley Dirksen Award for “Distinguished Coverage of Congress.”

His series of stories on the breakthrough research being performed in reversing Alzheimer’s disease, earned him the Associated Press Television-Radio Association Bill Stout Award for Enterprise Reporting. He has also won three Los Angeles Emmys, nine Golden Mikes, an Investigative Reporters and Editor’s award for exposing an underground medical network in Los Angeles, a regional Edward R. Murrow Award for exposing fraudulent soliciting at Los Angeles International Airport and numerous other investigative reporting awards from the Associated Press, the L.A. Press Club, and the Radio and Television News Directors Association.