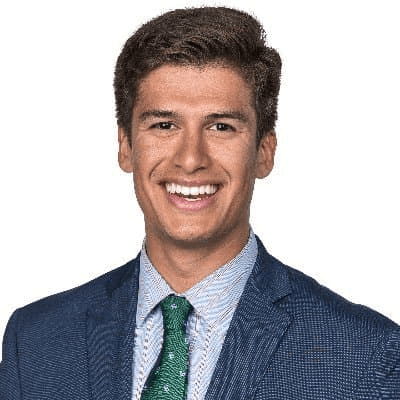 Danny Freeman is an Emmy award-winning media personality serving as an Investigative Reporter at NBC10. He joined NBC10 in January 2021. Previously, he was a Political Reporter at NBC 7 San Diego, and Host of San Diego’s only Sunday Political Show ‘Politically Speaking.’

He is a Colombian American.

Originally from New York, Danny is a Spanish-speaking Colombian American. However, there is no information about his parents’ identities and siblings.

Danny is in a relationship with Lori Lizarraga.

Lizarraga is an Ecuadorian-Mexican-American journalist from Texas. At 24, she became a Murrow and Emmy-award-winning international reporter for her 2017 coverage of the Ecuador earthquake. Four years later, she has gone on to report for NBC affiliates in California and Colorado.

In March, Lizarraga published an editorial that ignited a national conversation around representation in news. Her piece, “LatinXed: 9NEWS Got Rid of Three Latina Reporters This Past Year, Including Me,” has seen tremendous outcomes for the media industry, including eliminating the use of “illegal” to describe undocumented immigrants at more than 60 TV stations across the country.

Lizarraga has also received the 2021 Dale Award from the National Association of Hispanic Journalists and the 2021 Larry Tajiri Media Award from the ACLU of Colorado, recognizing her outstanding work to further civil rights and liberties for the citizens of Colorado and Latinos across the country.

She has a son named Liam.

Danny is an Emmy award-winning reporter for NBC10. He joined NBC10 in January 2021 from San Diego’s sister station NBC 7. There he served as a political reporter and host of the station’s weekly public affairs show “Politically Speaking.” Prior to that, he worked as a reporter at KGET-17 News, the NBC affiliate in Bakersfield, California.

Danny’s career in journalism began in Medellín, Colombia, where he covered politics and the country’s 2014 presidential election. Following his experience abroad, Danny returned to the U.S. and joined the NBCUniversal Page Program in New York where he worked at MSNBC and the NBC News Decision Desk. He then joined NBC Nightly News and soon after became a campaign-embedded reporter covering the 2016 presidential race on the road for NBC News.

“As a reporter, I love the impact of listening to people,” said Danny. “Every day I report is an opportunity to understand why someone is happier or sadder or more frustrated than they’ve ever been before. I believe understanding those perspectives, and giving those people the microphone, is the best way to make change happen.”

In his free time, he enjoys running half-marathons, doing crosswords, and exploring new cities. He also enjoys talking to students about journalism and politics and is passionate about supporting his fellow Latino communities.