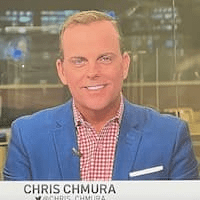 Chris Chmura is a media personality serving as a Consumer Investigative Reporter at NBC Bay Area since April 2016.  Previously, he was a consumer reporter on WTVT in Tampa, where he spent nearly 10 years.

Chmura is around 47 years old as of 2022. However, his birthday is unknown.

He is tall in stature. He stands at a height of 5 feet 9 inches.

After completing his high school education Chmura joined the University of Florida College of Journalism and Communications where he graduated with a Bachelor of Science in telecommunications.

Chmura was born in Long Island, New York before his family relocated to Florida. He grew up near Tampa Bay – the ‘other’ Bay Area. However, he has not disclosed any information about his parents and siblings.

Chris is a married man. In 2019 he wrote, “my wife’s tea mesmerized me today,” on his Facebook page proving that he was for sure married.

However, he has managed to keep his wife away from the limelight. Therefore, her name is unknown.

Chmura and his lovely wife haven’t shared with the public whether they have kids or not. Hence, this information is still a mystery.

His goal is to help consumers settle disputes — no matter how large or small; simple or complicated. Chris says he aims to empower viewers with the knowledge that will make them savvy consumers.

He joined NBC Bay Area from WTVT in Tampa, where he spent nearly 10 years as a consumer reporter. His stories offered viewers advice for saving money, avoiding scams, and traveling smart.

Prior to that assignment, he worked at WFLA in Tampa, and in Washington D.C. at The Associated Press and Conus TV News Service. He began his career at WCJB-TV in Gainesville, Florida as a fill-in weekend weather forecaster.

Over the years Chris has covered raging wildfires, chased countless hurricanes, and interviewed hundreds of people. He also reported expansively on the September 11 attacks, as he lived near the Pentagon in Washington D.C.

He has been honored with several regional Emmy Awards for his consumer reporting. He has also received awards from the Associated Press, The Society of Professional Journalists, and the William Randolph Hearst Foundation.

When he’s not working, Chris is planning his next getaway — his life’s ambition is to see as much of our planet as possible. Yes, he does carry his passport at all times, just in case!

He has an estimated net worth that ranges between $1 million and $5 million.