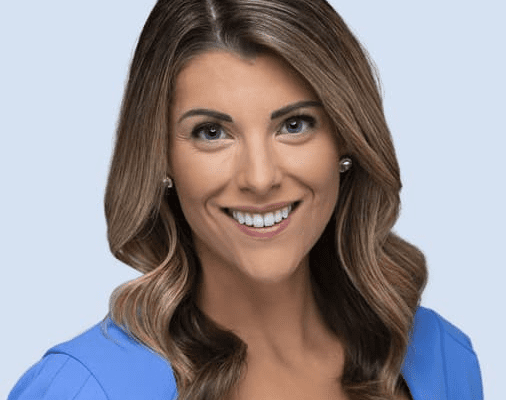 Caroline Goggin is a media personality serving as a news reporter for 7News/WHDH-TV in Boston. She joined 7News in July 2020. Previously, she was a weekday anchor and reporter for WPRI Media in Providence.

Goggin graduated from Penn State University with a degree in Broadcast Journalism in 2014.

Caroline was born and raised in Philadelphia, Pennsylvania. She is the daughter of Julie Goggin and Robert Goggin. However, she hasn’t revealed whether she has siblings or not.

Goggin is married to her husband Travis Eldridge. The couple tied the knot in 2019.

A week after her honeymoon, Goggin suffered a stroke while telling a story to her husband as they cleaned up after breakfast in their home in Massachusetts.

“I was so scared because we didn’t know what had caused it,” Goggin said.

Goggin said speaking out has helped because it led to her connecting with other young stroke survivors. Support and stories from peers who’ve endured the same experience also have inspired her to raise awareness about the stroke risks for young people.

After surviving a stroke in October 2019, Caroline has become an advocate for the American Heart Association. In February 2020, she was honored as one of the Southern New England chapter’s ‘storytellers’ – an opportunity to use her story to encourage others to learn and recognize the signs of stroke.

In her free time, Caroline loves running, traveling home to see her parents, and spending time with her husband and dog.