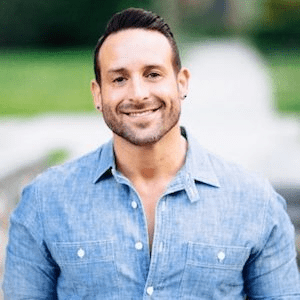 Carmine Sabatella is a Real Estate Agent at Sabatella Group, Compass, Berkshire Hathaway HomeServices Properties and Sotheby’s International Realty. He is also a Co-host of HGTV’s “Inside Out” alongside Mike Pyle. Previously, he was a part of Bravo TV’s My Fab 40.

He graduated in 1998 with a Bachelor of Business Administration in Business & Public Relations from the University of Southern California.

He is the son of Vera Sabatella and Ralph Sabatella. His mother, Vera is from Los Angeles and she is living in Pasadena, California as of 2021. She is also the owner of Carmine’s Italian Arcadia. His father, Ralph passed on in June 2009 at the age of 64. He has a brother, Tony Sabatella.

Sabatella is gay and he is married to Ryan Delair, a Real Estate Agent at Compass. Ryan is also a model, actor and a fitness enthusiast. The couple tied the knot on September 6, 2018. They started dating in June 2015 before getting engaged in June 2016.

He was previously married to his ex-wife whose name is unknown.

He has a daughter, Gianna Evangeline with his ex-wife. The two enjoy traveling, since his goal is to travel the world with her before she turns 20.

Carmine Sabatella Inside Out

When it comes to people, it’s what’s on the inside that counts. When it comes to homes, that philosophy is highly debatable, seeing that the outside counts just as much as what’s indoors. Sabatella and Pyle come with two very unique skill sets, the former is all about interior design, while the latter is an expert landscaper. The show puts both their skills to the test as they take on each other and a new client to create homes that are stunning all around. As per an article by HGTV, “Inside Out will follow renovation duo Carmine Sabatella, an interior designer, and Mike Pyle

Advertisement
, a landscape designer, as they battle each other to balance client priorities and budgets to make houses beautiful from the inside out.”

The show will premiere on Monday, April 26, at 9 p.m. ET/PT. It is a seven-episode series following the duo, Carmine and Mike. The budget is set, so the guys must be persuasive to score a bigger chunk of the dollars to either max out the interiors or make the most of the outdoor spruce up.

Sabatella started his career in the restaurant business before he discovered his love for interior design. He ultimately ended up switching careers and soon found his true calling in the process. He currently runs his own real estate business, under the name of Sabatella Group.

Sabatella is no stranger to reality TV seeing that he was previously a part of Bravo TV’s My Fab 40. The show features people who go all out for their 40th birthday with extravagant celebrations. Sabatella was featured on season 1, episode 3 which aired back in 2015. As per the episode summary; “Formerly-straight single dad Carmine Sabatella dreams that his 40th party will peacefully unite the two worlds he has kept apart: his fabulous new gay friends with a straight world that includes his ex-wife, daughter, and mother. Will Carmine’s Hunger Games theme act as perfect way to unite the two groups, or will it cause tension more palpable than the movie?”

He was hit by a car in late 2016 which ripped off the fasciae in his muscle and also left him with a twisted leg. He had to undergo multiple surgeries.