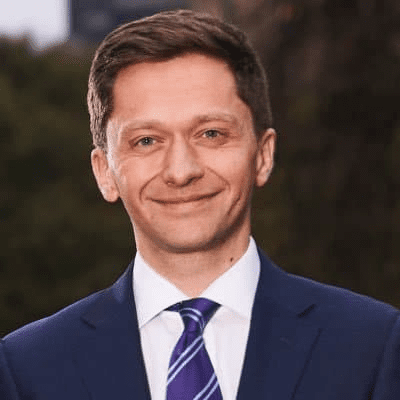 Carl Dinnen is a media personality serving as a Political Correspondent for the ITV News Channel. Before joining ITV News Channel, he worked as a reporter at Channel 4 News.

Born in Belfast, Hillsborough Carl is 50 years of age.

He is a British journalist currently residing in London.

He also studied Social and Political Sciences at Trinity Hall College, Cambridge. Additionally, he obtained his Journalism degree in the year 1992 from Cambridge University.

Dinnen’s parents are Jane and John Dinnen. His father is a retired clergyman, the Very Rev John Dinnen.

The father is a prominent figure, having served as Church of Ireland’s Dean of Down Cathedral and Rector of Parish Church of St Malachy, Hillsborough, before his retirement in 2007.

Carl’s mother is also a well-known former teacher at Dromore High School and Banbridge Academy. She served in the science department.

He has two younger brothers; Andrew (45 years of age) and Paul (46 years) and they both live in England. Andrew is in the RAF and Paul is a teacher.

He’s happily married, to his wife Samana Haq. The couple worked together at ITN before they started dating seven years ago. Samana served as news editor before taking up the post of head of news at the Ministry of Justice. They married about 5 years ago and have a son together named Zidan meaning ‘to prosper.’ Their son’s name is borrowed from a Muslim since Samana is from a Muslim background. They regularly visit  Northern Ireland, where Carl grew up. “My wife and I like nothing better than chilling in front of the telly on a Saturday night with a burger and chips.”

Carl has another son, Harper, who’s 16years old. The son lives with his former wife, Pauline in Belfast.

He frequents Northern Ireland as often as he can – at least once a month – to see his son, and says he can’t wait for him to meet his new brother.

Carl did his first media work as a script runner on an internship basis for three months at CNN, the American broadcasting network. He then worked freelance for a few months before getting a place on ITN’s graduate training scheme.

Serving ITN TV for the first time as a News reporter, his training was back home in Belfast, with Carl covering a shift for John Irvine, who’s now a senior international correspondent with ITV News.

“I remember my first report was an incident when some shots were fired through a window somewhere in north Belfast, but no one was seriously hurt”, Carl recalls.

In 2003, he got his chance when he joined US troops as they invaded Iraq. He explains: “I got to wear my flak jacket when I went to Iraq during the invasion in 2003. I was with a US artillery unit.”

In his service, Carl has been to some of the world’s biggest war zones and conflicts. At Channel 4, he was part of a team that won a BAFTA in 2012 for a report on the Japanese tsunami. In that year he, also exclusively revealed the number of British Military children to have lost parents in Iraq and Afghanistan. Carl also reported from Norway in the days following the Utoya massacre, and during the Queen’s historic visit to Dublin.

Carl’s insightful questioning of politicians often makes famous and breaking stories that rival news outlets have no choice but to also run with. For him, there is a great sense of professional satisfaction from this. A recent example was an interview with Theresa May in Japan when a quote he drew out from her became front-page news in the next day’s papers. He says: “Last year, she gave me a great quote about standing in the next election and said ‘I’m no quitter’.

Carl Dinnen Salary and Net Worth