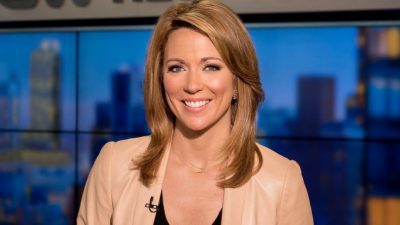 Brooke Baldwin is a bestselling author and a media personality serving as the anchors of the 2 – 4 p.m. edition of CNN Newsroom. She joined the network in 2008 and she is based at the network’s New York bureau.

Baldwin is an American Citizen.

She attended The Westminster Schools, a private college-preparatory school. In 2001, she graduated with bachelor’s degrees in Spanish from the University of North Carolina at Chapel Hill and in Journalism from the university’s Hussman School of Journalism and Media.

As an undergraduate, she also studied abroad at the Universidad Iberoamericana in Mexico City.

Baldwin is the daughter of Steven Robert Baldwin and Christine King Fulton. Her father was a consultant at Deloitte while her mother was a teacher. Unfortunately, her mother died of cancer when she was 12 years old.

She is a distant cousin to Alec, Stephen, and Willian Baldwin, who are all in the entertainment industry.

In July 2017, Baldwin revealed that she was engaged to English producer James Fletcher. They were married in May 2018. The couple met at a friend’s party in which James had flown to the states to attend.

They don’t have children yet.

Baldwin anchors the 2 – 4 p.m. edition of CNN Newsroom. She joined the network in 2008 and she is based in New York.

In 2013, Baldwin reported live from the red carpet at the Golden Globe Awards. The same month she traveled to Washington to cover President Obama’s second Inauguration. Over the next few months, she returned to Boston to interview survivors and anchored a special live show from Fenway Park during the World Series. Baldwin has also anchored from the field amid tornado debris in Moore, Oklahoma and from Cleveland, covering the release of three women held in captivity for a decade. Additionally, she joined CNN’s Jake Tapper for special coverage of the historic government shutdown from Capitol Hill.

In 2012, Baldwin reported live from Newtown, Connecticut in the days following the Sandy Hook elementary school shooting. She was tapped to co-anchor the network’s global coverage of the Queen’s Diamond Jubilee with Piers Morgan in London. In addition, she covered the 2012 Presidential election, anchoring her show from the Republican National Convention and participating in the network’s primetime coverage of the GOP primaries.

Due to the success of Baldwin’s #MusicMonday series of original artist interviews, she hosted a half-hour special on music on CNN. In 2009, she exclusively reported on the new discoveries of the forgotten Mayan City of Mirador for CNN International’s “World’s Untold Stories.”

Baldwin joined CNN after serving as a lead reporter for the 10 p.m. newscast for WTTG in Washington, D.C., where she covered the shooting massacres at both Virginia Tech and the West Nickel Mines School, a one-room Amish schoolhouse in southeastern Pennsylvania. At WOWK in Charleston/Huntington, West Virginia, she was the morning anchor and reported on the Sago Mine collapse and Martha Stewart’s release from federal prison. She began her news broadcasting career at WVIR in Charlottesville, Virginia.

After 13 years at CNN, Baldwin says she “has to walk away” from the job to be the “bravest version of herself.”

Baldwin announced her “personal news” in February 2021 during her afternoon show that she would be stepping away from news and would be leaving the cable news network in April 2021.

In an interview with Yahoo Entertainment, she revealed that one of the main reasons she would be walking away from her longtime gig was because she was beginning to feel too comfortable.

“The second you get really, really comfortable somewhere after a long period of time, it’s time to move on,” Baldwin said.

Brooke was part of the CNN’s Peabody-award winning team, covering the oil spill disaster in the Gulf, the collapse of the Upper Big Branch Coal Mine in West Virginia; and the battle over the fate of the nation’s big three automakers.

She worked with the CNN’s Special Investigations Unit to complete her first hour-long documentary “To Catch a Killer” which won a Silver World Medal for Best Investigative Report at the New York Festivals International Television & Film Awards 2012.

Baldwin contributed to the CNN’s award-winning coverage of the 2008 presidential election.

She earns an average salary of $4 million per year.