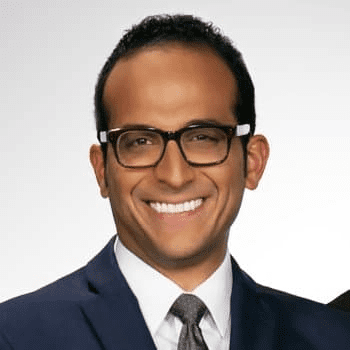 Bigad Shaban is an award-winning Senior Investigative Reporter for NBC Bay Area. Previously, he was a Network Correspondent for CBS News, based in Los Angeles.

Shaban was born on May 11. However, his exact age is unknown.

During his senior year at the University of Florida, while president of the Florida Cicerones, Shaban led the effort to bring back the long-lost F Book, a collection of university-based traditions that is, once again, bestowed to every incoming freshman.

Shaban was also elected to the University of Florida Hall of Fame in 2006 and honored with an Outstanding Leader Award by the UF Alumni Association.

The son of Egyptian parents, Bigad was born in Florida. However, there is no information about his parents’ identities and siblings.

Bigad is married to his wife Kelly.

On August 16, 2022, he wrote on his Instagram account; “Ten years ago today, I took you into a field and asked you to spend the rest of your life with me. That, as I’m sure you’ll remember, was after I knelt down, reached into my pocket, realized my jeans were too tight to pull out the ring, so then had to stand back up, actually pull out the ring, and finally get back down on bended knee.”

“Sure, I wouldn’t exactly describe us as coordinated. Our lives haven’t always gone as planned, but we’ve seen it through, together. I know we have a lot more to see.”

“This current chapter feels particularly cruel and heavy. It is. So much has been stolen from you. It keeps taking and taking and taking. But you are faithful and strong. Fear is not our future. You’ve lost sight but not vision.”

After years of struggling with infertility, the couple adopted their daughter, Rayah. They also have a son.

Shaban is an award-winning investigative reporter for NBC Bay Area. He has been recognized for his work by several news organizations, including the National Academy of Television Arts and Sciences, Louisiana Associated Press, Society of Professional Journalists, Florida Associated Press, and the Iowa Broadcast News Association.

Most recently Shaban led an investigation into the misuse of school police officers and captured the attention of top officials at the White House. The investigation led to security changes in schools across the country and was recognized with a George Foster Peabody award, an Alfred I. DuPont-Columbia University award, two Emmy awards, and an Edward R. Murrow award.

Prior to joining the Investigate Unit, Shaban was a network correspondent for CBS News, based in Los Angeles. He reported for CBS Newspath, the network’s 24-hour affiliate news service. In addition to providing coverage for CBS affiliates across the country and network news partners abroad, Bigad also filed reports for CBS national broadcasts, including The CBS Evening News, CBS This Morning, and CBS Sunday Morning.

Shaban has consistently been on the front lines of the nation’s biggest stories, including the Asiana plane crash in San Francisco, and the devastating tornado in Moore, Oklahoma. He has covered the Oscars, major political elections, and some of the worst natural disasters in recent history. He also led the CBS coverage of the 2012 Summer Olympics as the network’s only credentialed correspondent inside the London games.

Before joining CBS Newspath, Shaban reported for WWL-TV (CBS) and WVUE-TV (FOX) in New Orleans. His stories prompted government hearings, police investigations, and changes in state and local law. In 2010, he was the first reporter to break the news of the Deepwater Horizon oil rig leak in the Gulf of Mexico, after the U.S. Coast Guard initially announced no such leak existed. Prior to his work in New Orleans, Shaban reported for KGAN-TV (CBS) in Cedar Rapids, Iowa. There, he covered local and national politics, including the presidential campaign trail.