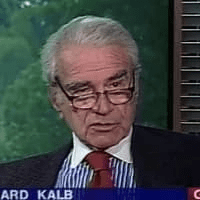 Bernard Kalb is a media personality serving as a journalist, moderator, media critic, lecturer, and author. He covered international affairs for more than three decades at CBS News, NBC News, and The New York Times. He was also the founding anchor and panelist on the weekly CNN program Reliable Sources from 1993 to 1998.

Kalb went to New York City public schools and graduated from the City College of New York in 1951 with a B.S.S. He later received an M.A. in 1953 from Harvard University.

The son of Max and Bella Kalb, immigrants from Poland and Russia, Bernard was born in New York.

”His father, Max, was a tailor,” a close friend of Bernard’s said.

He was raised alongside his brother Marvin Kalb.

Kalb has been married to his wife, Phyllis. In Indonesia, where Kalb served from 1956 until 1961, his wife gave birth to their first daughter, whom they named Tanah, the Indonesian word for earth. They have three other daughters, Marina, Claudia, and Sarinah. The last two were born in Hong Kong, where he worked from 1962 to 1970 for CBS News.

Kalb is an American journalist, moderator, media critic, lecturer, and author. Born in New York City, he covered international affairs for more than three decades at CBS News, NBC News, and The New York Times. Nearly half that time he was based abroad in Indonesia, Hong Kong, Paris, and Saigon.

Near the end of his tenure at the Times, Kalb received a fellowship from the Council on Foreign Relations – awarded annually to a foreign correspondent – and took a leave from the newspaper for a year. He also won an Overseas Press Club Award for a 1968 documentary on the Vietcong.

He and his younger brother, journalist Marvin Kalb, traveled extensively with Henry Kissinger on diplomatic missions and later wrote a biography together entitled Kissinger. The two brothers also co-authored The Last Ambassador, a novel about the collapse of Saigon in 1975.

In 1984, Kalb was appointed Assistant Secretary of State for Public Affairs and spokesman for the State Department. It was the first time that a journalist who covered the State Department had been named as its spokesperson. Kalb quit this post two years later to protest what he called “the reported disinformation program” conducted by the Reagan Administration against the Libyan leader Col. Muammar al-Gaddafi.

Over the years, Kalb’s assignments have placed him in the midst of prime-time stories. As State Department spokesman, he was with the U.S. delegation when President Reagan held his first summit with Mikhail Gorbachev in Geneva in November 1985. As a television correspondent, he accompanied President Nixon on the opening trip to China in 1972 and traveled with Presidents and Secretaries dating back to Nixon and Kissinger on their diplomatic journeys.

In his later career, Kalb travels widely as a lecturer and moderator at home and abroad–on subjects ranging from US foreign policy to the media. He was also the founding anchor and a panelist on the weekly CNN program Reliable Sources from 1993 to 1998.