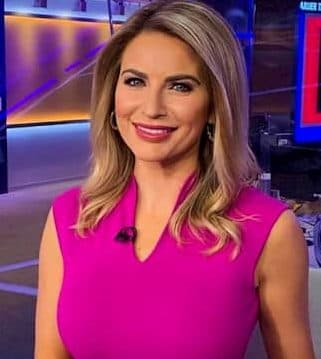 Ashley Strohmier is a news personality serving as an overnight anchor and a news correspondent for FOX News Channel based out of New York. She was also Miss Missouri USA in 2010. Previously, she was a general assignment reporter and an anchor at KMIZ-TV (ABC) in Columbia, Missouri.

A graduate of Helias High School, a Roman Catholic school based in Jefferson City, Ashley joined the University of Central Missouri in 2007 and graduated in 2012 with a degree in Criminal Justice.

Born and raised in Jefferson City, Missouri, Ashley is the daughter of Dana Strohmier and Steve Strohmier. She is very close to her family and often posts their pictures on her social media accounts.

The news personality is flaunting her love life on her social media accounts. Ashley is not married yet. However, she is in a relationship with Michael Counihan, an American fitness model, a personal trainer and a law enforcement officer with the NCY Police Department. He has also been featured in many bodybuilding magazines.

The couple does not have kids yet.

Strohmier is an overnight anchor and a news correspondent for FOX News Channel (FNC) based out of New York. She joined the network in March 2020.

Prior to joining FNC, Strohmier served as a general assignment reporter and an anchor at KMIZ-TV (ABC) in Columbia, Missouri where she covered crime, as well as state and local politics. In 2014, her in-depth reporting on the state’s Department of Social Services resulted in lawmakers opening an investigation into the agency’s practices, earning her an award from the Kansas City Press Club.

In addition, Strohmier was honored by the Missouri Broadcasters Association with the Best News Anchor award in 2019 for her work as an evening news anchor. Throughout her tenure with the station, she also held additional titles, including solo anchor for News This Morning, where she also produced, anchored, and managed its daily content.