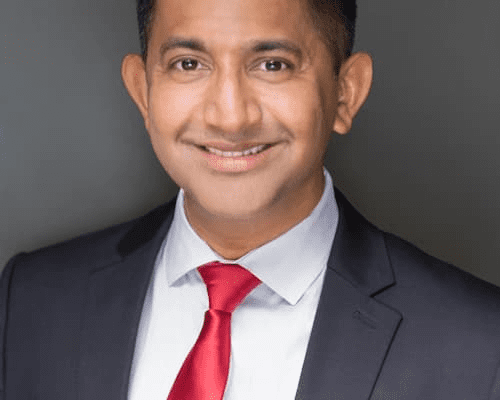 Archith Seshadri is a global journalist and TV host based in Atlanta, Georgia. He serves as the Atlanta Bureau Chief/Anchor for Nexstar Media Group reporting for stations across the southeast (GA, AL, FL, SC, NC).

Seshadri is around 40 years old as of November 2022. He was born on October 18 in India. However, he hasn’t revealed the year he was born.

He is averagely tall in stature. He stands at 5 feet 7 inches tall.

Archith was born in Chennai (Madras), India to loving parents. His father was the first in his family to work abroad and the first to settle in America.

He was raised alongside his younger brother, Ashwin Seshadri. However, he has been to various places. He grew up in India, Germany, Australia, and the United States.

In 2019, his brother, Ashwin wed Anu Romesh at Lake Lanier.

A successful young man like Archith will leave many wondering whether he is married or not. However, that’s not the case for Archith.

He recently came out as gay. A decision that wasn’t easy at all since it involved so much risk. He faced the risk of acceptance on several levels, including cultural, as he did not grow up in a community where being gay was accepted.

Since his big revelation, Archith hasn’t shared with the public whether he is seeing someone or not.

Archith is a global journalist based in Atlanta, Georgia. He is the Atlanta Bureau Chief for Nexstar Media Group serving 4 stations that represent 45 counties in Georgia (WJBF, WSAV, WRBL, and WSPA). As the State Capitol Reporter, Archith covers stories impacting the Peach State including Issues on state government, healthcare, education, cyber security, economic impacts, and entertainment all of which Georgia residents rely on heavily for their well-being.

An engineer turned journalist, Archith brings more than a decade’s worth of on-air experience as an anchor/reporter/host. Growing up in India and Australia, Archith decided to be a journalist because he wanted to hold the powerful accountable, watch history unfold, and tell stories about people for people.

Archith has navigated many newsrooms over the years including Macon, GA (CBS), Augusta, GA (ABC), Charlotte, NC (FOX), and Atlanta, GA (CNN). Archith left the United States for an opportunity to be the prime time anchor in New Delhi, India for a global English network for 2 years. He covered everything from pop culture to politics while anchoring 4 hours of daily news coverage.

Archith has covered the Ebola outbreak from Atlanta, National Police Week from Washington D.C., the US 2016 election coverage from New York, the historic Trump-Modi meeting from the White House, and field anchored from across India.

A Georgia Tech graduate, Archith spent 6+ years as a consultant at Accenture before switching careers to the media world. When he’s not reporting the news, he performs improv on stage and trains students in western classical music. A game show buff, Archith competed and won ABC’s $100,000 Pyramid with Snoop Dogg and Questlove.