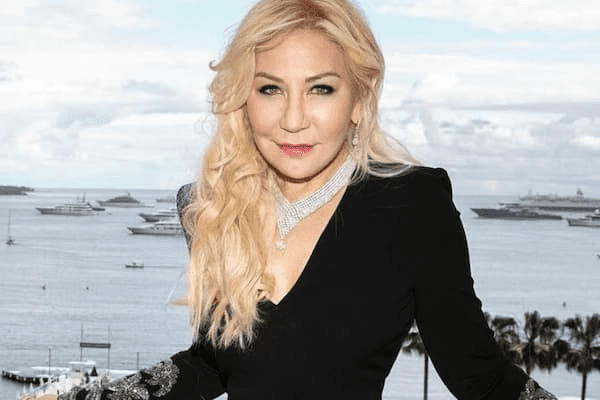 Anna Shay is a socialite and a Philanthropist. She is also star of the new Netflix reality show “Bling Empire.”

She’s studying to become a licensed contractor, she told Town and Country.

Born in Tokyo but long based in Los Angeles, Shay is the only daughter of the late billionaire industrialist Edward Shay, an American defense contractor who is often labeled an arms dealer, and his Japanese wife Ai-San whose family was in the exporting business.

Per Shay, she is a descendant of Eastern European Jews on her father’s side, while her mother’s ancestry includes both Japanese merchants and Russian aristocracy. Edward Shay died in 1995, 40 years after founding government contractor firm Pacific Architects and Engineers (PAE). While Ai-San passed away in L.A. in 2015 at the age of 92. In 2006, Anna and her brother Allen Shay sold PAE to Lockheed Martin in an all-cash, $1.2 billion deal. The two siblings shared the money equally, putting Shay’s net worth at USD $600 million.

Anna has been married and divorced four times. The four divorces have all been through amicable agreement. However, currently she hasn’t mentioned whether she is single or in a relationship.

Shay has a son called, Kenny Kemp. He is 27 years old. He briefly starred on Bling Empire, as the son of Anna Shay. Kenny is also known for owning $500,000 glass pipes and bongs, and has been described as a “passionate stoner” by Buzzfeed. According to reports, he kept and hid the bongs in a vault inside his mother’s Beverly Hills mansion.

Kenny is in a relationship with Nikki Trivino, who is from Los Angeles since 2011.

“I need to grow up a little bit”, Shay said, referring to her fellow Bling Empire cast members. “Sometimes I think the other cast members are too serious. And I think the way that we grew up is very different. I had to put them in check. I’m not here to raise them. I’m here to make sure they’re OK. My son [Kenny Kemp] is 27. His friends are always over, asking me for advice. I’ve always been around kids as my mother was with me.”

Anna is star of the new Netflix reality show “Bling Empire.” The show is about the lives of Los Angeles’ fabulously wealthy Asian community.

She became involved in Bling Empire after some prodding from producer Jeff Jenkins, who is best known for his work on Keeping Up With the Kardashians. As longtime friends, Shay expressed her interest in working as an assistant on one of Jenkins’s shows, which eventually turned into a leading role.

“The next thing I knew, I was sitting in front of the camera. I’m really quite shy, so it was hard. I never thought about doing this, especially at my age,” Anna told OprahMag.com.

Initially, she forgot to cash her Netflix check.

Shay told OprahMag.com, “It was so confusing when I got the checks. I didn’t know what to do with them. I didn’t cash them, then I got in trouble for not cashing them. I have them in a savings account. I’d like to have a party some time. I don’t think the money belongs to me. I think it belongs to the crew that had to put up with me.”

Shay has also spent time on the board of the George Lopez Foundation, which raises awareness about organ donation and kidney disease. The Shay Foundation, which focuses on music, the performing arts, and education, was founded by her late parents.

Shay resides in a secluded Mediterranean-style villa in the mountains above Beverly Hills. She famously bought that property from Dr. Phil’s son Jordan McGraw back in 2019 for $5 million, and has since renovated and modernized the wildly-decorated house.

Previously, she sold her Sunset Boulevard mansion in July 2021 for $13.9 million after being initially listed with a $16 million ask last year. Per records, the discount buyer is Daniel Bohbot, a Moroccan-born fashion designer and longtime Beverly Hills resident.

On Bling Empire, Shay’s house served as a setting for several of the show’s most memorable moments, including a grand dinner party where the hostess pointedly moved the seating card of her arch-nemesis — nouveau riche socialite Christine Chiu — from near the head of the table to its very end, far away from the favored members of Shay’s squad. (Yes, it’s a very one-percenter sort of slight.) Later came the infamous penis pump incident, which occurred when two of Shay’s nosy guests threw a “plumbing apparatus” from her home’s second-floor bathroom window, onto the grassy lawn below.

Built in 1926, the 8,700-square-foot mansion sits on more than an acre of land, atop a grassy knoll high above bustling Sunset Boulevard. Shay acquired the mansion for $9.4 million almost exactly a decade ago, back in late 2011, and had long planned to give the premises a sensitive yet comprehensive restoration.

She has an estimated net worth of $600 million.