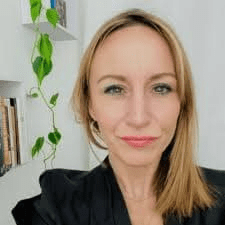 Anna Holligan is an award winning media personality serving as the BBC foreign correspondent based in The Hague, Netherlands. Previously, she was the BBC arts and entertainment reporter.

She was born in Edinburgh, Scotland. However, her exact age is unknown.

Holligan is a Scottish national. She was born and bred in Edinburgh, Scotland.

Holligan is keeping her parents out of the limelight. She hasn’t disclosed anything about them or her siblings publicly. It is therefore unknown whether she has siblings or not.

She is married. However, her husband’s identity is unknown.

She also has a four year old daughter, Zena.

More than once, Anna has been seen reporting news alongside her daughter. In December 2020, her report for Radio 4’s Today programme was interrupted by her. She was protesting after her mother stepped on her toe.

In May 2021, Anna presented a news report with her daughter in tow.

Earlier on, she told the PA news agency; “I remember recording some radio links with her on my knee, as I was wheeled out of hospital following an emergency C-section. She’s usually pretty good at staying relatively quiet for a couple of minutes. In this instance, it was close to bedtime and she was excited about talking to our family in Scotland.”

Holligan is a foreign correspondent for BBC based in The Hague since August 2011. She’s been involved in covering some of the biggest breaking news stories across Europe.

Anna was the first western TV journalist to meet the refugees arriving on the Greek island of Kos. She also reported on terror attacks in France, Belgium and Finland for the BBC’s main TV, radio and digital platforms. Recently, she presented BBC Radio 4’s World Tonight programme as a guest.

Previously, she served as the arts and entertainment presenter at BBC. She was also the BBC TV producer covering global news between February 2007 and August 2010.

Prior to that, Holligan was a reporter based in London. While there, she covered international news stories. She began her career in 2006 as a reporter for BBC Radio1 Newsbeat based in the United Kingdom. She also won an award for her documentary about teenage gun gangs in Birmingham. Currently, she’s focusing on mobile journalism, international justice and Brexit.

In May 2021, Anna gained fame in social media after sharing a video in which she was presenting a news report with her daughter in tow.

“I decided to share on Twitter because so many young women who I admire so much have messaged me privately to say they’re inspired and find it reassuring to see there’s a way to have children without sacrificing their career.”

In the video, Her four year old daughter, Zena was seen trying to get her attention while she was on camera delivering a piece on the Eurovision song contest.

Even though this piece inspired so many people, others thought it wasn’t the right thing to do. In her defense, she said; “Covid changed this. Suddenly we were all forced to embrace the presence of our offspring… it was no longer a taboo – for some – to have your kids around.”

Oh the joys of breaking news on a non school day.

Look out for the full film running @BBCWorld from 2200CET.