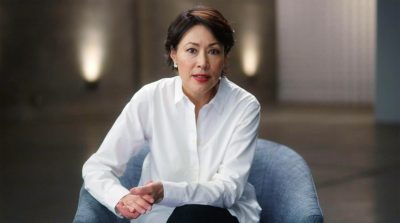 Ann Curry is an American journalist. She mainly covers stories on human suffering in times of war and natural disasters. Curry has reported several conflicts including, Israel, Afghanistan, Darfur, Congo, Syria, and Iran wars. She also covered natural disasters, including the Haiti earthquake that occurred in 2010 and the Indian Ocean tsunami in 2004.

She is 5.6 feet tall and weighs in at approximately 55kg.

Curry is an American Citizen, born in Agana, Guam, USA.

She was raised by her Japanese mother, Hiroe Nagase, and her American father, Robert Paul. They are five children in her family, and she is the eldest.

She went to Ernest J. King School and attended Ashland High School. In 1978 she joined the University of Oregon to pursue a degree in Bachelor of Arts in Journalism.

Ann currently lives in Connecticut, USA. She is married to Brian Ross, and together they have two children, namely William Walker Curry Ross their son, and McKenzie Ross, their daughter.

She began her career in 1978, working as an intern in KTVL. She later became the first female reporter in the station. In 1980 she moved to KGW, where she worked as a reporter. At around 1984 she worked for KCBS TV, where she earned herself two Emmy awards.

In 1990 she started working at NBC News, where she first became the Chicago correspondent; later, she became an anchor of NBC news sunrise. From 1994 to 1997, she was a substitute for Matt Lauer at Today.

In 2005 she was the co-anchor of Dateline NBC. She became the anchor of NBC in 2007. From 2005 to 2011, she was a primary substitute on NBC Nightly News. She worked as an NBC News national and international correspondent and also a unique news anchor of NBC News.

After departing NBC in 2012, she returned to the screens in 2018 with her series “We’ll Meet Again.” It involved 12 individuals looking for people who changed their lives.

In 2019 she began working at TNT, hosting Chasing The Cure.

In 2012 Curry was fired from NBC. This brought a lot of drama many people could not understand why the sudden departure from NBC. Eight years down the line, she finally speaks about the matter. She could not deny the pain she felt after being fired; Curry expressed herself by explaining  she did nothing wrong. She was fired for defending her fellow women against harassment. Curry went to inform the management to closely monitor the behavior of her co-host Matt Lauer on how he behaved towards women. After a colleague came to her and told her about  Matt sexually harassing her, she begged Curry not to disclose this information to anyone. Truth be told, she did not tell anyone, just warned the management of Matt’s behavior and funny fact she was fired for this reason.

Curry did not regret defending a fellow woman, and she clearly states she can do it all over again. She loved the work she did in the show “Today,” but it all came to an end. After she was fired, many people did not take this action well. as many of them said the network is racist because she is multiracial.

Her work has definitely not gone unnoticed; this is evident by the numerous awards she has received, including:

1.She was awarded Emmy awards for coverage, including the Los Angeles earthquake that occurred in 1978, the San Bernardino gas pipeline explosion, and the Darfur crisis.

2.She has been awarded the Golden Make four times in a row.

7.The Truth in Media Award

8.In 2008, she received the Commonwealth Award Of Distinguished Service.

Ann is a very generous person. This is seen with the charitable organizations she is involved in, including

Not much information has been provided about how much she earns as her salary. Her net worth is estimated to be $10 million. She mainly gained her wealth through her journalism career.