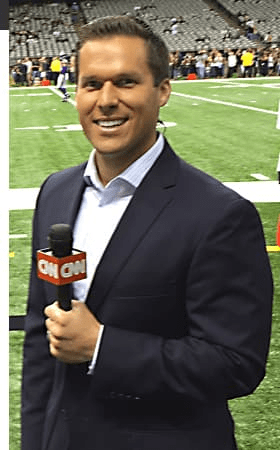 Andy Scholes is an American media personality serving as a sports reporter and anchor for CNN based out of Atlanta. He joined the network in March 2013 and also provides Bleacher Report updates across CNN and HLN. Previously he was a sports anchor for CW33.

Scholes is around 38 years old. He was born and raised in Houston, TX.

He was born and raised in Houston. However, there is no information about his parents. He hasn’t also mentioned whether he has siblings or not.

Scholes is married to his wife Lauren Scholes. The couple has been together for some time now.

Scholes and his wife Lauren are blessed with three sons; Camden, Beckett, and Nolan. During his free time, Scholes enjoys precious moments with his wife and sons. On December 7, 2018, he posted a post on his Instagram account captioned, ‘One out of three is good in baseball! Luckily for Beckett and Nolan, Cam was a champ and told #Santa what everyone wanted.’

Scholes is a Sports Anchor for CNN based out of Atlanta. He joined the network in March 2013 and he also provides Bleacher Report updates across CNN and HLN.

Before joining CNN, Scholes was a Sports Anchor and reporter for KDAF in Dallas, Texas. He was previously a Weekend Sports Anchor for KAMC 28 News, as well as KLST News.

Throughout his career, he has covered a wide range of sports events, such as the World Series, the Super Bowl, and the NBA Finals. During his travels, Scholes has interviewed Shaq, Charles Barkley, LeBron James, Tony Romo, and many more.

In February 2021, Tiger woods, a golfer was hospitalized after sustaining injuries in a single-car accident in Rancho Palos Verdes, California, when his car flipped over and sustained major damage. The accident left him with two compound leg fractures and a shattered ankle.

During the CNN broadcast, Andy made a controversial comment which angered many people. When asked by anchor Brianna Keilar for his response, Scholes said, “Stunned, I guess, but not entirely surprised by what we’re seeing here. Tiger, back in 2017, was found by police pulled over to the side of the road, asleep in his car. He had said he had taken a lot of painkillers at that time because we all know Tiger has undergone a lot of surgeries over the years and painkillers have become a part of his life.”

Scholes apologized repeatedly and personally in a number of tweets referencing his on-air comments.

Previously, Woods was arrested in Jupiter, Florida in 2017 for driving under the influence of prescription drugs. Police also suspected that alcohol or drugs may have been a factor in Woods’ single-car accident near his Florida home in 2009, although no supporting evidence was uncovered.

Scholes has an estimated net worth of $1 million.