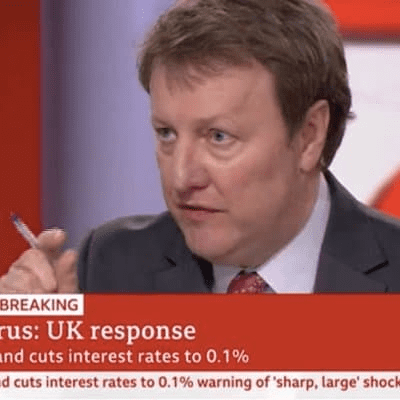 Verity is an English national.

Born in Leeds, United Kingdom and raised in Barnet, Andrew has managed to keep his family away from the limelight. It is therefore not known whether he has siblings or not. He hasn’t also revealed his parents.

Andrew married a fellow BBC journalist in March 2012. He lives in Buckinghamshire with his wife and daughter.

Verity is an award-winning economics correspondent for BBC News. He covers finance and business on the BBC radio and TV bulletins as well as reporting for Panorama, BBC Newsnight and BBC Radio 4’s investigative strand, File on Four.

He can currently be heard on the Today programme, Radio Four’s six o’clock news and the BBC News TV channel reporting the worst economic crisis in 300 years caused by the pandemic – all the while knowing how much of the truth about the previous mega-crisis has been covered up and kept from the public.

Joining the BBC from The Independent, Verity worked first as personal finance correspondent then as a presenter on BBC Radio Five Live, where for 8 years he hosted the BBC’s daily financial radio programme and popular podcast Wake up to Money. Before the credit crunch struck in 2007 he proposed a TV series warning of the risks of an imminent crash in the housing market which became BBC2’s The Truth About Property, attracting an unusually large audience; it was repeat-commissioned both before and after the crisis of 2008.

Since being appointed economics correspondent in 2014, he’s broadcast and published high-impact investigative stories including a Panorama film which revealed the Bank of England’s role in the Libor scandal and a 2018 documentary exposing money laundering by a Ukrainian gangster, where he made headlines when one of the gangster’s thugs kicked him in the groin. In a more recent film, Following the Drug Money, he exposed how global consultants EY covered up evidence of smuggling by an organised crime gang that was laundering the proceeds of sales of illegal drugs in the UK via the gold markets of Dubai.

Andrew Verity Salary and Net Worth