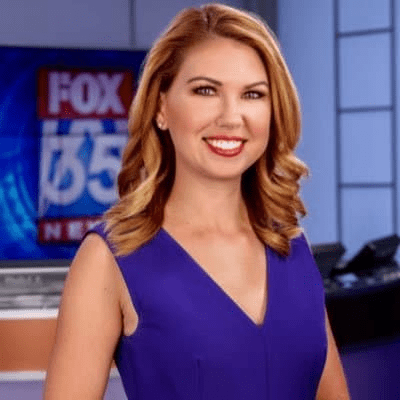 Amanda McKenzie is a media personality serving as a reporter for FOX 35 Orlando. Previously, she was a general assignment reporter for News 13 in Orlando.

She was born in Florida. However, her age is unknown.

She also received a Master’s degree in Broadcast Journalism from New York Film Academy in Manhattan in 2010.

She was born and raised in Florida. However, there is no information about her family background, parents’ identities, and siblings.

Amanda is married. The couple tied the knot on October 10, 2020. They are also parents to two dogs, Queso and Rosy.

Amanda is an Emmy-nominated and award-winning journalist. Since 2018, she has loved being part of the FOX 35 ‘Good Day Orlando’ morning news team.

While she was born and raised in the Sunshine State, she has moved to three other states as a broadcast journalist. Most recently, she reported for News 13 in Orlando, investigating community concerns and covering court cases.

Prior to her move back to Central Florida, she reported in Greensboro, North Carolina for Time Warner Cable News, where she was recognized as one of the top reporters in the state by The Associated Press. While in Greensboro, she provided complete and continuous coverage of the John Edwards campaign finance trial from the federal courthouse. Before moving to North Carolina, Amanda worked as a reporter for WAKA-CBS in Montgomery, Alabama, where she covered national stories, such as Alabama’s controversial law on illegal immigration, and the devastating tornadoes that ripped through the state, causing severe damage and hundreds of fatalities.

In her free time, Amanda enjoys going for runs, traveling, and playing with her Cavalier King Charles Spaniel, named Rosy.