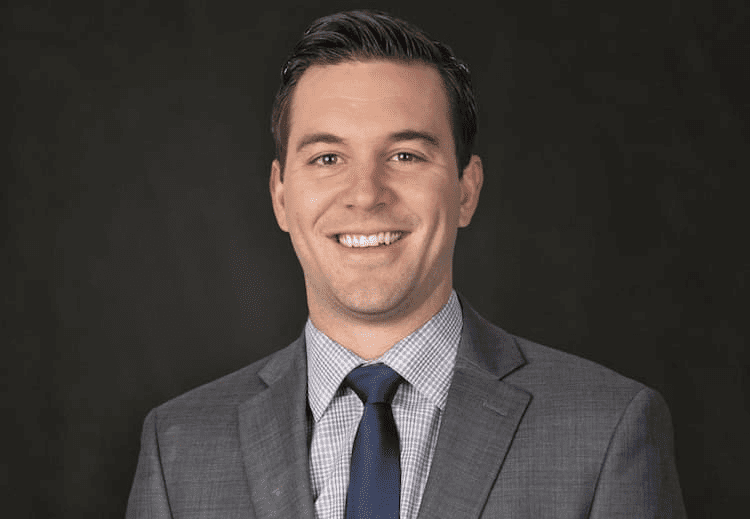 Alex Caprariello is an award-winning media personality serving as West Coast correspondent for NewsNation Network based in Los Angeles since September 2021. Previously, he was a reporter for KXAN-TV in Austin.

He was born in December 14 in Raleigh, North Carolina. However his age is unknown.

Caprariello is American by nationality.

Alex joined Middleton High School in 2006 and graduated in 2009. In 2013, he earned a Bachelor of Arts (BA) in Business/Corporate Communications from the W.P. Carey School of Business at Arizona State University. He also received a Master’s degree in Sports Journalism from Arizona State University’s Walter Cronkite School of Journalism and Mass Communication in 2016.

He is the son of Charles Michael “Chunk” Caprariello and Linda Caprariello. His father, a New York Cowboy married his mother on August 4, 1979. On July 13, 2018, he died aged 70 years old.

Caprariello isn’t married. However he is in a relationship with Sarah Liuzza. The duo lives together in Los Angeles. On October 12, 2021, Sarah turned 30 years old.

Caprariello is a West Coast correspondent for NewsNation Network based in Los Angeles. He joined the network in September 2021.

Alex began his career at KNWA/KFTA in Fayetteville, Arkansas in January 2017. He was the weekend anchor and senior reporter at the NBC/Fox affiliate located in Northwest Arkansas. Known for his in-depth reporting, Alex began working at investigative powerhouse KXAN in Austin in 2018. As the station’s lead education reporter, he quickly established credibility within the community through accurate and dependable reporting on K-12 issues throughout the entirety of the coronavirus pandemic.

While in Arkansas, Alex initiated a number of notable reports including an analysis of the state’s struggle to launch the medical marijuana industry, an examination into allegations of bribery in a tightly contested mayoral race and an investigation which uncovered repeated abuse of patients in a treatment center for deviant children.

A sports fan to the core, Alex said one of his greatest achievements was reporting at the 2016 Summer Olympics in Rio de Janeiro, Brazil. His favorite memory from the games was interviewing NBA superstars and U.S. gold medalists Carmelo Anthony, Kyrie Irving and DeMar DeRozan.

He is an outdoors enthusiast and loves hiking. His most thrilling adventure came when he hiked 40 miles into the Havasupai Reservation at the base of the Grand Canyon to camp at the summit of a 500-foot waterfall. He looks forward to exploring Central Texas and all the great activities it has to offer.

Caprariello won numerous awards while in Austin, including a Lone Star Emmy for his two-part investigative series, Racism at Westlake. The investigation uncovered years of alleged racism within the halls of a dominant academic and athletic high school in the Texas suburbs. He was also honored with awards from the Texas State Teachers Association, the Association of Texas Professional Educators and the Society of Professional Journalists.

His special report, “Pricing Parenthood: The Cost of In Vitro Fertilization,” which details the financial burdens infertile families experience when undergoing last-resort procedures, was a finalist for best television feature by the Society of Professional Journalists Diamond Journalism Awards.