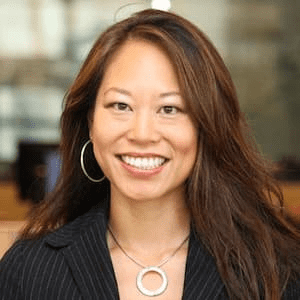 Ailsa Chang is an award-winning media personality serving as the host of NPR’s All Things Considered, alongside Ari Shapiro, Audie Cornish, and Mary Louise Kelly. Previously, she was a Planet Money correspondent and a congressional correspondent with NPR’s Washington Desk.

Chang is around 46 years old. She was born in San Francisco Bay Area, California, United States.

Chang graduated Phi Beta Kappa from Stanford University where she received her Bachelor’s degree. She also earned her Law degree with distinction from Stanford Law School, where she won the Irving Hellman Jr. Special Award for the best piece written by a student in the Stanford Law Review in 2001. In addition, Chang was a Fulbright Scholar at Oxford University, where she received a Master’s degree in Media Law. She also has a Master’s degree in Journalism from Columbia University.

Ailsa grew up in the San Francisco Bay Area, where she never got to have a dog. But now she’s the proud mama of Mickey Chang, a Shih Tzu who enjoys slapping high-fives and mingling with senators. Her parents are from Taiwan, and they’re always talking about how smart the Taiwanese are.

Two years ago this week. When my parents flew from CA to visit me for the first time at @npr headquarters in DC to watch me host ⁦@npratc. So much has changed in the universe. No more work office. No more DC. But parents will still fall asleep in public once pandemic is over pic.twitter.com/GdNY9ll192

Despite being a media personality she has managed to keep her personal life away from the limelight. Therefore, it is not clear whether she is married, single, or in a relationship.

Chang is an award-winning journalist who hosts All Things Considered along with Ari Shapiro, Audie Cornish, and Mary Louise Kelly. She landed on public radio after practicing law for a few years.

Chang is a former Planet Money correspondent, where she got to geek out on the law while covering the underground asylum industry in the largest Chinatown in America, privacy rights in the cell phone age, the government’s doomed fight to stop racist trademarks, and the money laundering case federal agents built against one of President Trump’s top campaign advisers.

Previously, she was a congressional correspondent with NPR’s Washington Desk. She covered battles over healthcare, immigration, gun control, executive branch appointments, and the federal budget.

Chang started out as a radio reporter in 2009 and has since earned a string of national awards for her work. In 2012, she was honored with the Alfred I. DuPont-Columbia University Silver Baton for her investigation into the New York City Police Department’s “stop-and-frisk” policy and allegations of unlawful marijuana arrests by officers. The series also earned honors from Investigative Reporters and Editors and the Society of Professional Journalists.

She was also the recipient of the Daniel Schorr Journalism Award, a National Headliner Award, and an honor from Investigative Reporters and Editors for her investigation of how Detroit’s broken public defender system leaves lawyers with insufficient resources to effectively represent their clients.

In 2011, the New York State Associated Press Broadcasters Association named Chang the winner of the Art Athens Award for General Excellence in Individual Reporting for radio. In 2015, she won a National Journalism Award from the Asian American Journalists Association for her coverage of Capitol Hill.

Prior to coming to NPR, Chang was an investigative reporter at NPR Member station WNYC from 2009 to 2012 in New York City, focusing on criminal justice and legal affairs. She was a Kroc fellow at NPR from 2008 to 2009, as well as a reporter and producer for NPR Member station KQED in San Francisco.

The former lawyer served as a law clerk to Judge John T. Noonan Jr. on the United States Court of Appeals for the 9th Circuit in San Francisco.