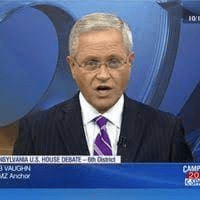 Rob Vaughn is a media personality serving as a News Anchor at WFMZ-TV based in Allentown. He has been in the station for more than 35 Years. He anchors the 5 pm to 6 pm News and 10 to 10:30 News. Previously, he was a radio presenter at WIP-AM in Philadelphia.

He was born in the United States of America. However, he has not disclosed information concerning the date, month, or year he was born. Therefore his age is unknown.

He is American by Nationality

Vaughn graduated from Temple University with a bachelor of arts in journalism. He also holds a master’s degree from the biblical Seminary in Hatfield.

He was born in the united states of America to his loving parents. His father Robert Vaughn is a widely known newsman in New York and in Philadephia. He is the brother of Mike who works for CNBC. His first cousin Del Vaughn serves as a correspondent at the CBS Evening News with Walter. Sadly, Del was involved in a plane crash and died in 1972 while reporting flooding caused by Hurricane Agnes.

Vaughn is married to Angela Vaughn. The duo has been blessed with three kids, Jim, Elizabeth, and Stephanie. The kids have been part of the Capella vocal group known as the “Vaughn Five” in churches and other venues. They have played in Allentown, Mayfair festivals, Stabler Arena, and at Allentown Cocacola Park. His son Jim also works as an anchor at WFMZ-TV.

Rob works as a news anchor at WFMZ-TV where he anchors the 5:00, 5:30, 6:00, 10:00 AND10;30 Newscast along with Wendy Davis. He has anchored the news for more than 30 years. Rob was awarded the ” Broadcast of The Year” Honor by the Pennsylvania Association of Broadcasters in 2018.  He has also been nominated several times for Emmy in the New anchor category.

Prior to joining WFMZ in 1987, he anchored radio news in Philadelphia and in Washington. Additionally, he has voiced documentaries for the history channel, discovery channel, and other networks. His Op-ed pieces have appeared in journals such as the morning call, The new york post, and the Philadelphia Daily News.

Additionally, he volunteers in community organizations like the Salvation Army’s Adoption and fosters care program, The National Multiple Sclerosis Society, The cancer support Community, and The Lehigh Valley Prayer Breakfast. He is also active in the bubble fellowship church in Red Hill.

In his free time, he likes spending time with his family and friends.