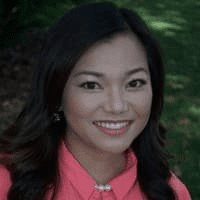 Nakano is American by nationality. She also belongs to the Asian ethnicity.

Rina is a 2005 graduate of Northwood High School in Irvine, California. She played varsity tennis for coach Seth Sushinski for four seasons. She also qualified for the CIF Tournament as a junior and senior, advancing to the second and third rounds, respectively.

Rina was a team captain for three seasons, and a 3-time Scholar-Athlete Award winner. She was also named the team’s Most Inspirational Player all four seasons and was an officer with the California Scholarship Federation for two years and a member of the National Honor Society.

In addition, Rina volunteered at the Kumon Learning Center in 2004 and 2005.

In 2009, Rina graduated from the University of California, San Diego (UCSD) with a Double BA in Communication and Japanese Studies and a minor in Music.

She is the daughter of Takafumi and Yumiko Nakano. She also has one younger brother named Jotaro.

Nakano is married to her husband Scott

Rina is a multiple award-winning storyteller at CBS2 and KCAL9 News. She joined the team in January 2022 as a Reporter/Multi-media journalist for the Orange County and Inland Empire areas. She is elated to be back near her hometown of Irvine.

Rina was most recently on the air in nearby San Diego, where she covered everything from the US-Mexico border crisis, and military affairs, to Comic-Con! She was also the first reporter on the scene at the 2019 Poway Synagogue shooting, which earned her an Emmy Award.

Her journalism journey has taken her all around the world. From Casper, Wyoming to Tokyo, Japan, to the state capital, Rina has had the privilege of connecting with people and telling their remarkable stories. Her most memorable experiences include meeting the survivors of the 2011 Great East Japan Earthquake and Tsunami and telling the story of the Asian American experience.

Rina is most proud of being a mother, wife, and dog-mom. When she is not reporting, you will most likely find Rina with her family, scarfing down tacos or slurping a boba.

Rina Nakano Salary and Net Worth