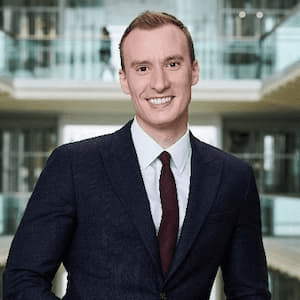 Paul Brand is a media personality serving as UK Editor for ITV News and Presenter of ITV Tonight. He was named Political Journalist of the Year at the British Journalism Awards 2020. Previously, he was a Political Correspondent for ITV National News.

He was born in Bridgend in South Wales. However, his age is unknown.

Paul attended Cowbridge Comprehensive School from 1996 – 2003. He later studied Bachelor of Arts in Politics, Philosophy, and Economics at Oxford University graduating in 2006 with First Class Honours. He was also awarded a scholarship to study Postgraduate Diploma in Broadcast Journalism at City, University of London graduating in 2008.

He is the son of Martin Brand. He was born and grew up near Bridgend in South Wales alongside his brother Gareth Brand.

Paul is openly gay and married to his husband Joe Cuddeford, a civil servant working at the Geospatial Commission, a government body that is part of the Cabinet Office.

Paul is UK Editor for ITV News since January 2021, covering the biggest stories facing the country, as well as the politics and policy behind them. He is also the new presenter of Tonight, ITV’s flagship current affairs show.

From August 2016 to January 2021, Paul was a Political Correspondent for ITV National News. He was named Political Journalist of the Year at the British Journalism Awards 2020 for his work uncovering the Covid-19 crisis in care homes. He also presents the ITV News podcast Acting Prime Minister and is also the co-founder of the LGBT+ campaign School Diversity Week which takes place between 21–25 June. Last year, schools and colleges representing 1.97 million pupils signed up to take part.

Paul first joined ITV News in 2008 as a journalist at ITV Wales. He has since worked for ITV London, ITV Tyne Tees, ITV Yorkshire, and ITV Border, as well as Good Morning Britain (2014 TV programme).

In 2016, he was the first journalist to report the defining result in Sunderland on the night of the EU referendum result and joined ITV national news shortly afterward as a Political Correspondent.

In 2019, Paul was named Broadcaster of the Year at the Pink News Awards for his investigations into gay conversion therapy. He has also co-presented the Peston programme on ITV and in 2021 fronted his first edition of the Tonight programme.

Paul Brand Salary and Net Worth