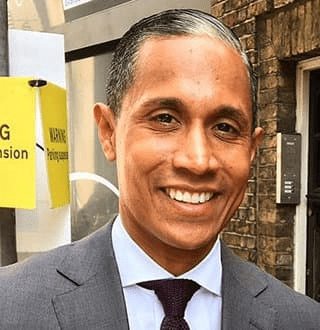 Miguel Almaguer is an award-winning media personality serving as a national correspondent for NBC News. He reports for all of the network’s divisions, including NBC Nightly News, Today Show and MSNBC.

Almaguer is American by nationality. He also belongs to the Latin-American ethnicity.

Almaguer attended Berkeley High School followed by the University of California, Santa Cruz, but left after his second year (sophomore year) and subsequently attended a community college in his hometown.

While at the college, his aunt, a news anchor in the San Francisco Bay Area, recommended that he look into taking a class being taught by her co-anchor at San Francisco State University (SFSU).

He joined San Francisco State University (SFSU) and graduated with high honors in Broadcast Communications. Years later he said, “I fell in love with the broadcasting department, my classes, and my local news internship… I still remember being a college intern… sitting in a local newsroom and watching the buzz and energy in the room.”

Almaguer was born in Oakland, California, and raised in Berkeley, California. His mother is Clementina while his father is unknown. He was raised alongside his elder brother. However his name is undisclosed. He also has an aunt who is a news anchor in the San Francisco Bay Area.

“My father, brother and I were so confused by the diagnosis. My mom, Clementina, is literally the healthiest person I know. Her diet is incredible. She eats veggies because she likes them, she doesn’t drink, she exercises every day and wrestles with my nephews until they give up. She has never smoked.”

“Doctors said it was likely a gene mutation, but nothing helped us really understand why this was happening to her, Almaguer said.”

Initially the doctors told Almaguer that his mother would need surgery, then she’d be OK. However after the surgery he was told that the cancer had spread to her lymph nodes and possibly the rest of her body. She was now stage 3 lung cancer.

“In the months that followed, I flew from Los Angeles to San Francisco’s Bay Area every weekend. My brother took care of her Monday through Thursday, and I spent Friday through Sunday nights with her. I felt guilty not living in the same city. I felt like she was slipping away, and there was nothing worse than that. She was so weak, so skinny. The woman who always exercised could barely walk,” said Almaguer.

After a series of chemotherapy and radiation Clementina was able to beat cancer.

“For five years, those scans were routine, until doctors said she beat the odds. Of course Mom did. She is a fighter, said Almaguer.

Miguel isn’t married yet. However due to his secretive nature it is  not known whether he is single or in a relationship.

When his mother was battling lung cancer Miguel said, “When we cried together earlier in her diagnosis, she wept over the fear of never having seen me get married or have kids. I told her I wasn’t in a rush and she’d have to stick around if she wanted to see that. Well, she has stuck around. Now that she’s in remission, I guess I should work on that.”

He hasn’t been blessed with children also.

Almaguer began his television career with KSBW in Salinas, California, in 2000. In 2003, he became a reporter for KCRA-TV in Sacramento. He then joined WRC-TV in Washington, D.C., in 2006 as a general assignment reporter covering breaking news. On April 2, 2009, Almaguer was hired as a Burbank, California-based correspondent with NBC News to report for all of the network’s divisions, including NBC Nightly News, Today, and MSNBC.

In 2004, Almaguer won an Edward R. Murrow Award for Spot News. He earned an Emmy Award for his reporting on the 2007 San Diego wildfires. He also received awards from the National Association of Hispanic Journalists.

As of 2011, Almaguer lived in Studio City, Los Angeles.

During the pandemic Almaguer reported from his perfectly spectacular living room (that showed no signs of kids, dogs, cats, or disarray). His living room was admired by many. One wrote, “No one’s personal space struck me as much as Almaguer’s living and dining rooms: wide wood plank floor boards that support a slate blue couch with one perfectly placed beige pillow, facing a coffee table with books that look like they were made to be stacked upon each other.”

“Behind the couch are wood stained shelves filled with more perfectly aligned books and artifacts that frame a doorway into what looks like a dining room with a dark wooden table and matching benches with a beautiful cashmere throw (Miguel seems like a cashmere kind of guy but the fabric could be cotton) hanging over the side of one of the benches. The smooth wooden magazine holder on the floor (that my dogs would have knocked over and gnawed on) displays two colorful notebooks: one red and one blue. And, how could anyone not notice the clean lines and simplicity of the light fixture over the dining room table?”

Almaguer has an estimated net worth of $1.5 million.