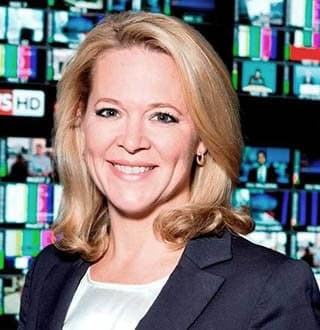 Lorna Dunkley is an award-winning media personality serving as a regular presenter for ABC News in Australia since August 2018. Previously, she was a news anchor for Sky News and hosted the weekend afternoon slot at 2-5pm.

Lorna is the daughter of David Dunkley and Jean Dunkley. Her family moved to Cornwall when she was six months old.

Her father, David was head teacher at her school, Bodmin Comprehensive School (now Bodmin College), where he taught for many years, first as head of humanities and then deputy head before taking over at the top.

Talking of him, Lorna jokes not without good reason that he is ‘far more famous in and around Bodmin than I’ll ever be!’

Her mother too, carved out a memorable career in the area, ending up as director of communications for Trading Standards in the county.

She has two sisters, Anna who is older than her and Rosie, who is younger

“We had such an idyllic childhood, looking back,’ says Lorna. “We settled in the countryside in a cottage on a farm near Blisland, and I remember my sisters and I having the run of the farm, playing in hay bales and looking after piglets and other animals.”

Dunkley has been married to Brad Higgins, lead SOSV investment partner, since 2000. The couple met in Westcountry where Lorna was working as a presenter for Westcountry TV while Brad was working in a senior capacity with the station.

‘It’s been funny this summer having a husband named Brad Higgins when Bradley Wiggins has been all over the news,’ Lorna laughed, ‘I have had to catch myself and make sure I say it right on air at times!’

The couple is blessed with two sons named James and Ollie. They lived in west London before moving to Australia.

Dunkley undertook researcher work with ITV Westcountry in Plymouth. She then became a reporter, covering stories including the Devon road protests and the environmentalist Swampy’s eight-day-long underground protest. She then fronted Westcountry Live from 2000.

After going freelance, Dunkley joined Sky News in 2002, and after a period as a reporter presented Sky News Sunrise, Live at Five, Sky News Today and Sky News at Ten, mostly at weekends. She moved from Sky News Sunrise to the weekend presenting line-up, joining Steve Dixon, Mark Longhurst and Chris Roberts. Dunkley left Sky News in July 2016, after a round of job cuts.

In August 2018, Dunkley joined the Australian Broadcasting Corporation, and regularly presents the news on ABC News in Australia.

In 1996, she was named the BT Young Journalist of the Year and attended a Buckingham Palace reception as a Young Achiever in Business in 1998.

Lorna Dunkley Salary and Net Worth