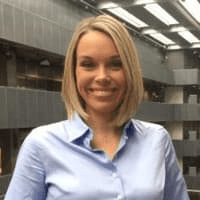 Laura Goodwin is a media personality serving as an Innovation Correspondent for BBC Scotland. Previously, she was a reporter/presenter at STV News.

Goodwin is around 30 – 40 years old. However, her birthday is unknown.

There is no information about her parent and siblings. Therefore, it is not known whether she has siblings or not.

Laura is married to  STV sports presenter Chris Harvey, whom she met while working in the newsroom. Chris was previously married and has two boys; Ewan and Emil from that relationship.

At 26, Laura became a full-time step-mum to Chris’s two youthful boys; Ewan 13, and Emil, 11, having to learn how to parent quickly! She then went through IVF, conceiving twin girls; Aelish Jo and her sister Robyn Elisabeth. The babies – weighing 6lb 4oz and 5lb 15oz – were born by cesarean section at Aberdeen Maternity Hospital on July 5, 2012.

She said: “I think four children is enough – any more then I will have to get a bus to transport them all.”

Laura is a BBC News anchor, host, and presenter. She has been a broadcast journalist for over 15 years. Her career started at Moray Firth radio before moving to STV North in Aberdeen as a presenter and reporter. She covered the opening of the Queen’s Ferry crossing, the new V&A museum, and the Scottish independence referendum.

2018 saw Laura join the BBC as their Innovation Correspondent, a new role created by BBC Scotland. Since then Laura has covered a range of stories celebrating the creativity and ingenuity of Scotland’s business and academic community. Reports include an app being used to aid end-of-life care, what Scotland’s dinner plate might look like in 2050, and a designer making 3D-printed wedding dresses.

Laura Goodwin Salary and Net Worth