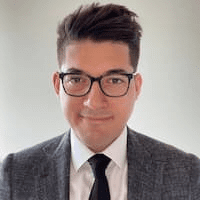 Kevin Rincon is a media personality serving as a General Assignment Reporter at CBS2 in New York. Previously, he was an Anchor/Reporter/Writer on Entercoin in New York.

He was born in the Bronx and raised in Newark. However, there is no information on the date, month or year he was born. Therefore his age is unknown.

Rincon is tall in stature but his height is undisclosed.

In 2010, he graduated from Quinnipiac University with a degree in journalism, and a minor in fine arts. He began his professional career in radio as a freshman in college working as a production assistant, writer, and reporter at WQUN-AM in Hamden.

Additionally, he went to Hudson Catholic High School from 2002 to 2006.

Despite being a media personality, he managed to keep his personal life away from the limelight. Therefore he has not disclosed information concerning his parents’ and siblings’ identities.

Rincon is married and currently resides in New Jersey with his wife and two children. However, he has not disclosed much information concerning his wife and the kids.

When he’s not working, he plays ice hockey and is an avid Liverpool fan.

As a first-generation American he learned to speak English by listening to all-news radio. That motivated his drive to pursue a career in the news.

By his junior year at Quinnipiac, he worked as an overnight radio anchor at WTIC-AM in Hartford, Conn. In all, he completed over half a dozen internships while finishing his coursework.

Soon after graduating, he took a job in Jacksonville, Florida, as a reporter and anchor at WOKV-AM/FM. He contributed to several Edward. R. Murrow and AP awards. He covered Florida politics, and the end of NASA’s space program and worked as a Jacksonville Jaguars reporter for the NFL Network’s SiriusXM station.

In 2012, he helped launch WNEW-FM, a CBS Radio station in Washington, D.C. In addition to his general assignment reporting, he covered Capitol Hill and the Supreme Court.

A few years later he returned home to NYC where he joined 1010 WINS as a reporter and anchor. It was the station that taught him how to speak English.

In 2015, he left to help launch another new radio station, this time on SiriusXM for FOX News. He was their afternoon drive-time anchor and breaking news reporter. He was also a politics reporter covering the 2016 election from start to finish.

Kevin returned to local news in 2018 when he joined WCBS 880 as an anchor/reporter. While there he started his transition to TV, freelancing at WCBS before becoming a staff reporter.

During his time at WCBS, Rincon has covered the COVID-19 pandemic, immigration and its impact in the NYC area, several elections, and severe weather.

Finally, being of Venezuelan and Portuguese descent, he enjoys food and is always open to recommendations.